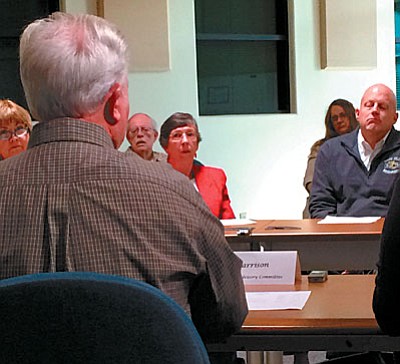 SEDONA - After months of requesting financial data specific to Verde Valley campuses, the Verde Valley Board Advisory Committee got what they asked for in a face-off with Dr. Clint Ewell, Yavapai College's vice president for finance and administrative services.

The key issue for representatives of the Verde Valley campuses was whether or not it was getting its fair share of tax-supported college funding in comparison to Prescott area campuses.

A candid and composed Ewell empathized with the community representatives about where the money was spent, while at the same time clarifying why it was spent.

"The language on the ballot was pretty generic. I can't deny what you're saying. If you look at $69.5 million - I don't know if your numbers are right or if the projections I saw are right - if 15 percent of projects are east side projects but 30 percent of revenue comes from the east side, that does not seem like a good deal for east side residents - but that's what they voted for," Ewell said.

In explaining the delay in providing a break-down of college-wide budget data into campus-specific categories, Ewell stated, "That's the way of college budgets. A lot of these expense categories have been in place for Federal governments for 30, 40 years."

Opening the volley of questions was Randy Garrison, the Cottonwood-based advisory committee member.

"I was told that we are creating classes based on degrees, that in order to keep (Free Application for Federal Student Aid) FAFSA funding, we have to keep degree-seeking students," said Garrison.

"We can offer a course, whether it's wine tasting or art or for credit. But FAFSA cannot get support for community education," Ewell said.

"How do we satisfy the needs of the community, and not just the college bound? If the community need is different, how do we do both?" asked Regner.

Regner then questioned the allocation of college funding.

According to his calculations, $9.6 million was spent on Verde Valley campuses, yet over the next 15 years, $24 million dollars in excess capital ("brick and mortar") revenue will be paid by area taxpayers.

"This is what we ask ourselves: 'Is getting $9.6 million and spending $24 million the right ratio?'" Regner asked. "A lot was put into capital funding for Verde Valley campuses. Is this unique?"

Ewell answered, "You're right, we spent a lot of money in capital expenses over the past few years. It's going to vary year-to-year."

"We took a campus that was using temporary buildings, buildings that were 30, 40 years old and junked them, took substandard classrooms and brought them up to quality standards. We really did try to improve student experience," said Ewell.

The document "Verde Valley Estimated Revenues and Actual Expenses" provided to the advisory committee by Ewell states Verde Valley campus spending averaged 87 percent of local revenue over the past five years ($12,524,446 expenses vs. revenue of $14,391,068).

Paul Chevalier, chair of the VVBAC from Sedona, indicated he was satisfied with the college's budget numbers.

"I look at this 87 percent and that's pretty good. I think you've been very honest and candid in answering our questions," Chevalier said.

Also discussed was the upcoming Sedona Town Hall meeting. The event will give community members an opportunity to provide feedback to Yavapai College as to what they would like to see happen with the Sedona campus.

"You will have three minutes to speak. That sounds short, but recall that Lincoln's Gettysburg Address was less than two minutes long," said Chevalier.

"Facts and critical thinking count and so do the number of people speaking on the same subject," Chevalier said. "Our committee is working hard to make recommendations to the governing board that fit the will of the people."

Chevalier said 130 seats have been prepared for the videotaped event. The meeting begins at 5:30 p.m. on Oct. 21 at the Sedona Yavapai College Building, Room 34, 4215 Arts Village Drive in Sedona.

The future of the Verde Valley Board Advisory Committee (VVBAC) was once again brought into question during the Oct. 6 Yavapai College District Governing Board (DGB) meeting in Prescott, according to Albert Filardo, a district board member himself.

When Filardo was asked how the DGB meeting went yesterday, he replied, "Towards the end, District Governing Board member Steve Irwin said, 'Reading the minutes of the Verde Valley Board Advisory Committee, they are not doing their job, so I'd like to add that to the agenda.'"

"I was surprised. I thought we got this all taken care of," said Filardo.

"Irwin's last comment was that we 'should be reporting to the president of the college,'" said Filardo.

When contacted after the meeting, Irwin stated:

"I can only speak for myself and not DGB or the VVBAC. The committee was established to provide feedback from the various Verde Valley communities the college services. They have been successful at accomplishing their goal, end of mission."

Committee member Carolyn Fisher from the Village of Oak Creek said, "We'll continue to look at data, whether the committee exists or not."
Contact
Sign up for our e-News Alerts
Most Read
7 days
30 days