Cowboys move to 3-4 after victory over North Pointe Prep 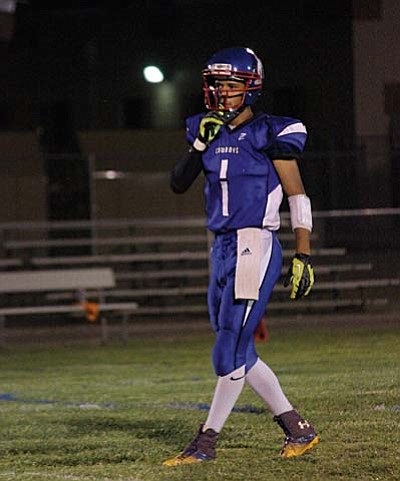 Senior Trevor Heyer prepares for a defensive play earlier this year against Pinon. Heyer intercepted two passes and had 100 yards receiving and a touchdown Friday. (Photo by Greg Macafee)

The Cowboys battled early, and seemed to awaken in the second half. Camp Verde went into halftime tied with the Falcons 7-7. The Cowboys exploded for 31 second half points and cruised to their second straight victory.

The Cowboys were powered by a wide range of players throughout the game on both sides of the ball.

Wide receiver and defensive back Trevor Heyer had a game, catching the ball on offense and defense. Heyer came down with one touchdown on 7 receptions for 100 of Payton Sarkesian's 209 passing yards. On the defensive side of the ball Heyer came down with both of Camp Verde's two interceptions, as the Cowboys forced two turnovers. The young sophomore gun slinger found four different receivers Friday night, throwing the ball 21 times, and completing 15 passes, according to Maxpreps.com.

He found Heyer and senior Dakota Brueland in the end zone for his two touchdown passes. He also threw one interception.

Brueland finished with four receptions for 57 yards. Ryan Loza and Jaysen Leonard also got in on the passing game, both catching two passes. Loza finished with 34 receiving yards and had one carry for 15 yards.

Leonard had another explosive game on the ground for the Cowboys, as the first year player continues to show his skills every Friday night.

The senior running back carried the ball 13 times for the Cowboys finishing with 136 yards, and three touchdowns. Leonard exploded for a 51-yard run his longest of the night.

Leonard averaged 10.5 yards a carry Friday night and has accumulated 681 yards rushing so far this season on 82 carries.

On the defensive side of the ball for the Cowboys, they racked up 52 total tackles, and brought down the opposing quarterback seven times Friday night.

Junior Reyes Hererra was a menace in the North Pointe Prep backfield Friday night as he brought down the NPP signal caller three separate times. Freshman Blaine Mahan got in the backfield twice to bring down the quarterback and Jesse Etienne and Ryan Loza also got to the quarterback once a piece. Etienne and Hererra led the Cowboys in tackles Friday night both racking up eight. Loza, Mahan and sophomore Rafeal Gonzales also tacked on five tackles a piece. With the Cowboys at 3-4 overall and 2-0 in section play, they get set to face the #3 ranked Joy Christian Eagles next week. The Eagles are undefeated this year and defeated the Mohave Accelerated Patriots on Friday 56-0.Kickoff is set for 7 p.m. at Camp Verde on Friday.