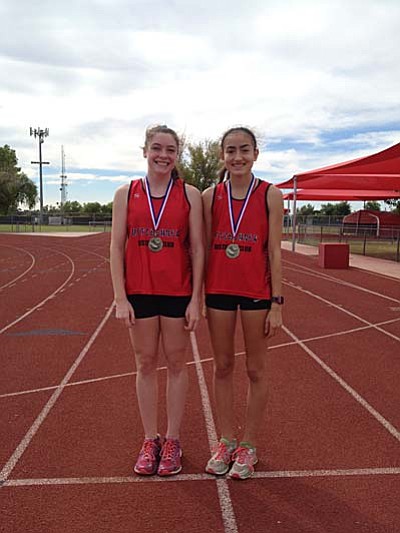 COTTONWOOD- On Saturday October 10, Head Coach Micah Swenson and the Aftershock Distance club traveled to Mesa Community College to race in the Mesa Thunderbird Cross Country Classic. The Aftershock crew were in for a tough race as outside of the a few other athletes it was mainly a college race field.

Allyson Arellano was victorious in the women's 5k race clocking in at 18:17.4, to earn first place. Allyson finished a little more than nine seconds ahead of Kaylee Franks, a junior at Arizona Christian University. Franks is an NAIA national qualifier in Cross Country and Track.

"We've got a lot of respect for Kaylee, having raced with her numerous times in the past. She's the real deal so it was a big win for Allyson," Swenson said.

Allyson let the race come to her at MCC and was pretty conservative at the start before picking it up a notch and letting loose to take the lead. Swenson said Allyson wasn't happy with the opening mile pace, and she knew that other runners had already settled into their pace so she made a move that would be hard for the rest of the pack to counter.

"She created a gap at that point which never came into jeopardy over the remaining 2.1 mile," Swenson said. "It's really hard to believe Allyson is still only 15 years old. She went out and controlled a college race. Her racing intelligence and savvy is remarkable."

Along with Allyson, Penny Fenn had success at the Thunderbird Cross Country Classic as well, clocking in 18:49.4, for a 5th place finish. Just like Allyson, Penny took a conservative approach as well, through the first mile Penny was sitting in 13th, before she kicked it into another gear to move up the leaderboard.

The Aftershock Distance club, also had runners Karen Arellano finish in 19:50.3 beating her time at Desert Twilight by 10 seconds, earning her a 22nd place finish. Destini Lobato, who is new to the Aftershock group, and is just an 8th grader competed in her first meet against college athletes.

"She ran strong and composed, finishing in 50th out of the 71 runners who came across the line. Her time was 22:04.5," Swenson said. "What I really liked about Destini's race was her ability to take mid-race instruction and apply it to what she was doing.

Jon Ulibarri was the last competitor for the Aftershock club and Swenson said he 'survived his trial by fire.' Usally Ulibarri is a middle distance runner but for the Thunderbird Cross Country Classic he jumped to the 8k run, and finished 48th out of 72 runners. He finished the five mile race in just over 30-minutes and moved up three spots over the final mile, which usually where most of the passing takes place.

"Having him jump up to the 8K distance was asking a lot," Swenson said. "But he ran a very intelligent race coming in 48th out of 72 runners. His approach was really good and it enabled him to be in position to still make moves over the final mile."

With each course comes something different in how it should be ran, or little things that runners can take advantage of. With the course being altered from past years the race looked very different. Swenson said he spent time at three different practices going over the race course with his runners, so they would have a better understanding of how to race it. But it wasn't until midway through the race that they were able to spot the advantage to utilize.