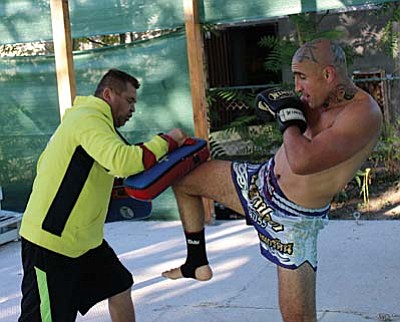 COTTONWOOD- On Saturday October 17th, Golden Cobra Center of Fitness and Vinnie's New York Style Pizzeria will present the New York Style Throwdown III with IKF Muay Thai and Kickboxing Championships. With 10 scheduled fights, seating will start around 5 p.m. The first fight between Manuel Roberson of Dragon Eye gym in Cottonwood and Gino Mendivil of Justo's Gym in Tempe will start at 6 p.m.

Usually gym's located in the Verde Valley are forced to travel for fights to gain exposure, with this event held in Cottonwood seven fighters from the Verde Valley will be get a chance to make a name for themselves. Manuel Roberson will be the first.

In the fourth fight of the night, Jacqueline Montijo of Larson's Fight Team in Camp Verde will be facing off with Nikki Cordova of 2 Knuckle Sport MMA in Surprise. This fight will be one of the three international rules matches of the night. Montijo's teammate will be the next to fight.

Saturday night will be headlined by two title fights. The Main Event will have 12-year old Corey Hines, representing the MMA lab in Glendale, taking on Ray Allen Jr. representing the Kings MMA and Muay Thai gym out of Houston, Texas. This fight will be for the Junior Amateur Muay Thai U.S. Cruiserweight Title and will consist of five, one-minute and 30-second rounds.

Salantri a fighter based out of the Verde Valley got into fighting with help from his father who is a 7th degree black belt. Salantri, a second degree black belt himself, thinks that gives him a strong base for any type of fighting style.

The 33-year old who walks around at 190 and fights at 165 has won close to five in a row. After losing a few before his win streak, Salantri feels like making the adjustment from fighting at 190 to 165 made a big difference.

"At the beginning I was fighting at 190, it's not like they were better than me, they were just pushing me over because they were a little bigger," Salantri said. "Now when we make the weight cut to 165 it makes things a little easier, I am a big strong man striking at 190 and then I go to 165 and it's that much easier."

Along with the help and encouragement from his instructor, Salantri believes that he is a couple fights away from making the step to the next level, with hopes of continuing his career in Muay Thai and MMA at the professional level.

Salantri plans on making the jump in both MMA and Muay Thai and believes the situation he is in helps set him up for success even more. A former protégée of the Olympic Development Program in soccer, Salantri received Division I and Division II scholarship offers. His soccer background gives him a little extra power in his kicks which can come in handy in the ring.

Salantri also trains with former UFC fighter Steve Judson out of GD Jiu Jitsu in Prescott and spends his weekends with Richard Williams at Golden Cobra. Salantri seems to be in the perfect mindset as he pursues his goals of taking the next step. His title fight on Saturday will sure set the tone as he gets set to move forward.

Along with the fights at New York Style Throwdown, there will be special appearances by Sensei Walt Larson, Hanshi Nico Fernandez, Sensei Sam Plunkett and Spanky Spangler, so grab your popcorn and get your seat early as it is sure to be exciting. For fighter info or general info contact Richard Williams at 928-300-0281 or email at cobrajet65@netzero.com.