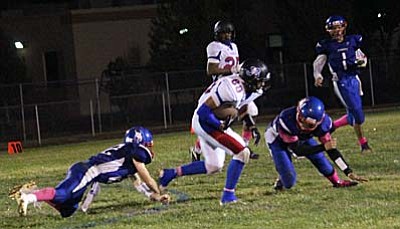 Camp Verde senior Jaysen Leonard (tackling right) and Bryce Wantland (left) bring down Joy Christian wide receiver Isaiah Goodspeed in the middle of the field Friday night. Goodspeed was kept quiet for most of the game by a stifling Camp Verde secondary. Camp Verde Head Coach Steve Darby was happy with the defensive performance that both Leonard and Wantland turned in Friday night against a strong Joy Christian passing team. (Photo by Greg Macafee)

CAMP VERDE- After the Joy Christian Eagles and Camp Verde Cowboys got their first possessions in Friday night, the skies opened up and the rain started coming down, it was everything the Cowboys were hoping for.

With Joy Christian being a pass-first team, quarterback Matt Mitchell seemed to struggle in the first half with the constant pressure from the Camp Verde defense. The Cowboys were able to hold the Eagles to a season-low 13 points in the first half all of which came in the first quarter.

"When you have a really wet field, wet ball, wet hands it really affects your passing game, so we were happy to see the rain come and I think it effected them a little," Head Coach Steve Darby said. At the 7:38 mark, Mitchell scrambled in from 3-yards out to put the Eagles up 7-0. Two minutes later, the Eagles went up 13-0 when Mitchell took another one to the house, this time from 64-yards out. Jesse Etienne got through the Eagles line to block the PAT and keep the Eagles within two-scores. After a failed Camp Verde drive and a Mickey Salas punt, the Eagles took over on their own 20-yard line. The Cowboys forced the Eagles to a 4th down, and Joy Christian decided to go for it.

After Mitchell was unsuccessful trying to get the Cowboys to jump off sides with a hard count, the Eagles audibled, Mitchell dropped back and threw a pass that was tipped by Etienne in the middle of the field. Senior Trevor Heyer came away with the first interception of Mitchell's senior year. To that point Mitchell had thrown for 71 completions this season without any interceptions until Heyer came down with the pass, it was Heyer's 6th interception of the year.

After his interception, Heyer was forced to step in under center as quarterback Payton Sarkesian had gone down after being sacked in the pocket.

Darby got a little creative, and called for a flea flicker that ended with sophomore Ryan Loza throwing a deep pass to senior Thomas Herrera who caught the ball for a 50-yard gain and the Cowboys were threatening. On the next play, Heyer found Loza for a 6-yard gain, then the penalties and miscues came to light. A holding call forced a 2nd and 22, then a Cowboy fumble on the snap resulted in a 3rd and long. A Joy Christian personal foul on a late hit brought the ball back to a 3rd and 22. After a short gain the Cowboys turned the ball over on downs.

The defense stayed strong though, as they did most of the first half. Jordan May broke into the backfield for a loss of yards. Ryan Loza got his hand on a ball to force an incomplete pass and the Cowboys forced the Eagles to punt. After a short offensive drive the Cowboys defense was back on the field, and they were pumped up. Darby was happy with his defense's performance in the first half.

"We were chasing their quarterback all night long and I don't think he is used to having people do that," Darby said. "Reyes Herrera was in his face all night long, We had one play in the second quarter that he took a while to get up and I think it affected him at least for a little bit."

That play came when, Etienne broke into the backfield for a sack and a 6-yard loss. It took a little bit for Mitchell to get back up and regain composure but you could tell the senior quarterback from Joy Christian was confused by the intensity of the Cowboys defense.

On the next play, Mitchell dropped back again and found a receiver open in the flat.

Jaysen Leonard came out of the secondary to make a huge play that almost forced the second interception of Mitchell's season. As the Joy Christian receiver bobbled the ball Leonard made a huge hit that put the ball into the air, where Cowboys defensive back Thomas Herrera almost made a play on it.

After a Cowboys face mask the Eagles gained a much needed first down. Mitchell scampered into the end zone two plays later only for it to be called back for holding by an interior lineman. The Cowboys held the line as the time in the second quarter ticked away.

Freshman Blaine Mahan deflected a ball at the line of scrimmage to force a fourth down. With 17-seconds left the Eagles elected to go for it. The Cowboys defense was able to chase Mitchell out of the pocket yet again, and Leonard made another big play in the secondary that allowed the Cowboys to go into the half down only 13. In the second half it was like a new ball game. The rain had stopped but the flood gates opened. The Eagles went onto score 34 points in the second half leaving the final score at 47-0, their second lowest scoring total of the year.

Mitchell then tacked on his 24th passing touchdown of the season when he found Lawrence in the back of the end zone for a two-yard touchdown pass.

He brought that total up to 25 touchdown passes later in the game.

Quadir Talley put the score at 40-0 on a 62-yard touchdown run. Mitchell put the final score on the board for the Eagles when he found Lawrence across the middle for a 35-yard pitch and catch.

After a great first half and a tough second half for the Cowboys, there were things that Darby said the Cowboys can take away from this loss as they move forward to next week.

"The defense in the first half several players, our pass defense was incredible, they got us on that middle screen in the second half and in the first half we were stopping it we were reading it, so I don't know what changed we didn't read it as well," Darby said. "There were definitely positives takeaways from this game though Trevor Heyer did a great job, Jaysen Leonard played great defense, Bryce Wantland did a great job coming up on the edge, and Ryan Loza played great in the linebacker spot."

The Cowboys move to 3-5 (2-1) as they look to face Paradise Honors at home next week.

The seniors will be playing their last home game and look to go out the right way.

Kickoff is set for 7 p.m. Friday night at Camp Verde.