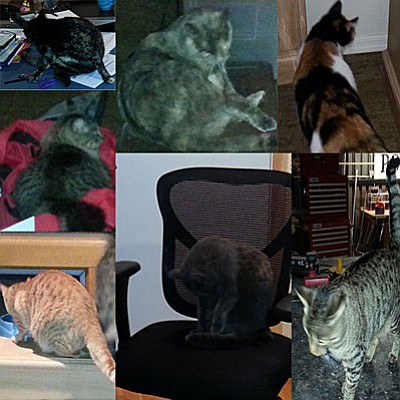 Before I go into my rant about my cats...what an amazing storm this morning! At 4:00 AM I woke up to what I was sure was the sound of gravel pouring down the hillside behind my house. This is certainly possible, given my hillsides and the way the road is situated. In fact, there have been times when I've seen water and debris cataracting -- sorry, turning nouns into verbs is one of my worst habits; it's probably better to say "tumbling" -- down the stairway that leads from my pump house to the ditch.

. In fact, it turned out not to be rain or gravel but the strange quality of the thunder with this storm. As I lay in bed listening I grew more and more convinced that there was some guy in the field shaking a big metal sheet. Not that I'm complaining. The more rain, the merrier!

Anyway, onto the cats.

I have eight cats. All but one of them was intended to be a barn cat.

You know, a working cat. One that lives in the barn, eats mice and rats and doesn't want to sleep on my bed with me. Of the eight felines that inhabit this property, not one of them can actually be called a "Barn Cat". That's because all of them would really rather sleep on my bed. I don't let them. If I did, I'd have to sleep somewhere else and give them the bed. I suspect that's their ultimate aim and I'm not giving in.

Let me start by saying I've always been a cat person and all of my cats are rescues. At the core of my being I'm a crazy cat lady. This is why I have so much trouble understanding Moosie's messages to me, information a born dog person would immediately understand. I'm trying to communicate in a language I don't naturally speak, one I'm only learning late in life and my accent is really horrible.

I think it's required of writers to be cat people, part of the job description. Dogs and anything that isn't writing or reading are very "Yang" (outward and energetic) while cats and writing are very "Yin"

(inward and passive). In one of my previous lives (one of the three before the dastard) the cats that came into my life were given names beginning with the letter "W". This went on for quite a while, starting with Wilson in 1983 (I should have listened to him when he clearly told me he didn't want the dastard in our lives) and working through to the last of them, Waku Oni, who appeared in 2013.

Waku whosits? Back in the 90s I lived in Japan for half a year. After leaving my four cats--Watson, Wilfred, Wilhemina and Winston--in the US with my sisters, of course I found a tiny little calico kitten in the bike garage of my apartment building. She became Wazuka Oni, very bad Japanese for "Little Devil". And she was just that, a tiny little she-devil with all the amazing intelligence you expect of Japanese Calico cats. Since the US and Japan have a very nice treaty, it was easy to bring Oni cat #1 home to the states, where she was incredibly disappointed to discover she had to share her house with other cats. It was a given that any future calico would have to be an Oni cat. I'm not sure what Waku means only that Japanese friends had named their son Waku Waku. No matter. Waku is living up to the Oni part of her name, terrorizing the other cats and the dogs by ambushing them whenever she can.

As for the rest of the felines who now share my life, since they were supposed to be barn cats I didn't want to name them. To me, names equal pets, and these guys were supposed to be feral and uninterested in humans. Our only interaction was to be me putting out a bowl of kibble once a day. Instead, they got epithets. There's Spots, Socks, Adventure Boy, Fuzzy, Shy Girl and Funny Face (who later became Fat Girl). Oh, and let's not forget Useless. That's the dark torty given to me by an acquaintance who swore she was a feral cat. Instead, she turned out to be former house cat with a love for sitting on my computer keyboard.

Like Scarlett O'Hara, she swears she will never be hungry again! That doesn't mean hunting for anything. That means staring at me until her food bowl is filled, even if she isn't ready to eat yet.

For the record it turns out epithets also equals pets as you can see from the picture. At least all but Useless hunt. Two of the cats spend most of their time in the barn, Spots and Socks. That doesn't mean they don't want their lap time. Today, Socks is out and about, hunkered down in a dry place no doubt. That's Spots dashing toward me, trying to convince me to stay and do that petting thing for a little longer.