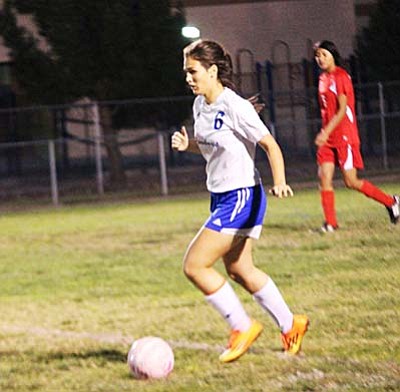 Camp Verde senior Lucy Showers dribbles down the field during Wednesdays game against the Holbrook Roadrunners. (Photo by Greg Macafee)

It was a night of celebration in Camp Verde, Wednesday evening as the Camp Verde girls soccer team took on the Holbrook Roadrunners in their last regular season game.

The Cowboys were also celebrating their seniors as Paige Church, Lucy Showers and Cheyenne Reece were honored at halftime of Wednesday night's game.

Going into Wednesday night the Cowboys were the 7th ranked team in AIA Division V rankings behind Desert Christian and in front of the Show Low Cougars who sit at #8.

With a solid position at the #7 seed the Cowboys are into the state playoffs, but their opponent has not been confirmed yet.

Coming into their final game of the season the Cowboys had gone 1-1 the past two games, beating the #5 ranked Northland Prep Spartans on Saturday 2-0.

On Monday the Desert Christian Eagles came to town and beat the Cowboys 4-3. The Cowboys got back to their winning ways though Wednesday, beating Holbrook 8-1.

Junior Raiven Alvey got the scoring started for the Cowboys against Holbrook, when she broke through the Roadrunners defense and was all alone for a one-on-one match up with the keeper.

Alvey dribbled right around the Holbrook keeper and put the ball into the back of the net. 1-0 Cowboys.

Less than a minute later the Cowboys would put another one on the board, this time courtesy of the Holbrook defense.

Paige Church dribbled down the left sideline and sent a cross in.

A Holbrook defender tried to clear the cross and instead miss hit the kick, and the ball ended up in the back of the net.

The Roadrunners didn't go that quietly though as they tacked on a goal of their own in the 30th minute.

Two minutes later, Paige Church got herself on the board for her senior night with a breakaway goal that put the Cowboys up two.

After breaking away from the Holbrook defense Church put one in the back of the net from just inside the 18-yard box. The Cowboys created many more opportunities in the first half.

Church found Alvey with a beautiful through ball. Unfortunately Alvey put her shot over the crossbar.

Church had another opportunity of her own about a minute later when she ripped a shot from about the 20 yard line but it ended up wife left. At the 18:30 mark Lupe Orta got in on the action ripping a shot from within the 18-yard box, but her shot was stopped by the Holbrook keeper.

Camp Verde was testing the Holbrook defense often in the first half and a minute after Orta's shot Alex Schaeffer had an opportunity that ended up wide left after a tough challenge by a Holbrook defender.

After too many opportunities to count the Cowboys broke through again to put the score at 4-1.

Church found Alvey with another through ball that sent her off to the races. Alvey converted this one putting it just inside the left post. The Cowboys took the 4-1 lead into halftime and never looked back.

Camp Verde scored four more goals in the second half cruising to another victory in their last game of the season.

The Division V State Championships will begin on October 29, with games taking place at the higher seeds field for the first round. If the rankings stay the same in Division V, the Cowboys will be facing off with the Round Valley Elks. Again, the rankings are not confirmed yet and are subject to change.

On Tuesday the boys' soccer team faced off with Phoenix Country Day and battled to a 1-1 tie.

The boys are ranked #12 in Division V and if the rankings stay the same will be the last team in for the State Championships which also begin on October 29.