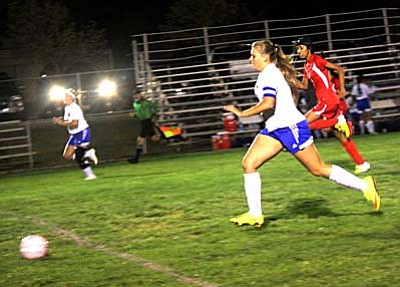 Senior Paige Church carries the ball up the field during the Cowboys last game of the regular season against the Holbrook Roadrunners. The Cowboys lost in their first round state playoffs match up against the Round Valley Elks on Thursday 3-2. (Photo by Greg Macafee)

ROUND VALLEY- Last year the Camp Verde girls' soccer team lost in the first round of the AIA Division V State Playoffs to the eventual State Champions Blueridge. This year they had just as tough of a match up going into the first round as they faced-off with the No. 2 ranked Round Valley Elks. The Cowboys gave it their all but came up just short losing to the Elks 3-2.

The Elks came into the match up with two girls that both had 20-plus goals in their 2015-2016 regular season campaign. It was Aldon Teeters who drew the match up of man marking Round Valley senior Nicole Slade. Slade went home with the victory, but it was only the second time this season that she had been held without a goal or an assist. Junior Rachel Brown scored two goals against the Cowboys in their first match up of the season. She repeated that feat Thursday night, her second goal of the night sent the Elks home with a first round victory.

Brown put the Elks on the board first, but the Cowboys played right with the No. 2 ranked Elks said Head Coach Pat Allen. Right before halftime, it was freshman Tyra Smith who knotted up the game for the Cowboys.

"We played right with them and tied it up right before half," Allen said.

10-minutes into the second half the Cowboys took the lead on the Elks when Lupe Ortega put her mark on the first round AIA State Playoff game. With the Elks playing a flat four defense the Cowboys were playing balls over the top trying to use their speed to get by the Elks defense.

"We played the game we expected to play," Allen said. "It was probably the best game we played all season."

With 19-minutes left in the second half it was Natalie Goodsell who tied the game up for the Elks. Allen said it was between the five and ten minute mark that Brown notched her second goal of the game and sent the Elks home with a victory.

"We pushed all the way to the end to try and go into overtime," Allen said. "We just suffered some injuries in the second half and ran out of steam. These girls had a really great season and I am proud of them."

The Cowboys will return a majority of their team next year after losing seniors Lucy Showers, Paige Church, and Cheyanne Reece.