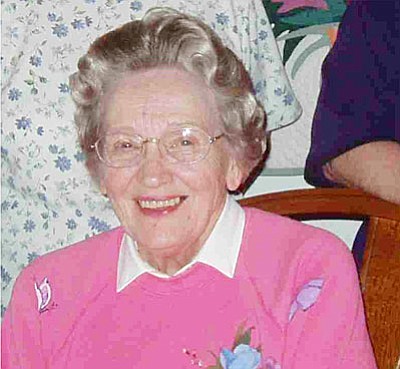 She was born February 28, 1924 in Celina, Ohio, the daughter of Harry and Edna Winkeljohn.

She was a member of Immaculate Conception Parish in Celina and worked for 10 years in the parish office. She also served as the City Treasurer in Celina.

Mary moved to Arizona in 1994 but, remained a loyal "Buckeye" until her death.

She was an active participant in the choir at Immaculate Conception Church in Cottonwood for 12 years and also participated in the weekly Fatima Rosary.

Mary is preceded in death by her parents, 2 brothers and 3 sisters.

She is survived by her sisters Dorothy Winkeljohn and Rita Poindexter both of Cottonwood, Arizona.

A funeral mass was celebrated at Immaculate Conception Church in Cottonwood on Friday October 30, 2015 at 2:00pm.

The burial will be held in Celina, Ohio at a later date.