Camp Verde Cowboys gallop by Roadrunners 10-0 to start off season with first victory. 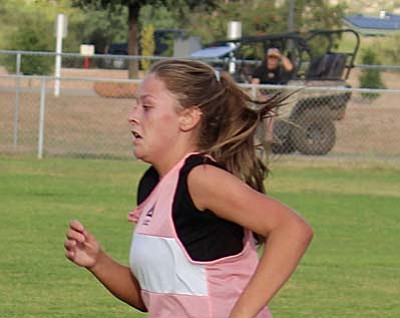 Raiven Alvey chases down a ball into the corner during the Alumni vs. Active game held this summer. Alvey was one of six players who score goals for the Cowboys Wednesday when they beat Holbrook 10-0. Aldon Teeters, Brina Church, Tyra Smith, Hailey Needham and Lupe Orta all added goals for the Cowboys in their first win of the season. VVN photo by Greg Macafee.

CAMP VERDE- The Camp Verde Girls Soccer team started off their season Wednesday night traveling to face-off with the Holbrook Roadrunners. It was 5-0 within the first ten minutes of the game and the Cowboys cruised to their first win of the season. Head Coach Pat Allen said his girls just played a great game from beginning to end with everyone getting some playing time.

"We started off with our full team and we got off to a strong start," Allen said. "The girls played good soccer and scored a bunch of goals in the beginning so we started playing our younger girls and we had a good game."

Aldon Teeters tallied three goals, Brina Church and Tyra Smith added two goals apiece and Raiven Alvey, Hailey Needham, and Lupe Orta all added a goal apiece for the Cowboys. Allen said going into the game they knew Holbrook was still in the process of building up a program, and the first five goals happened very quickly for the Cowboys but they were just playing there type of soccer.

"We were just playing a real controlled game of soccer, everyone was hustling, everyone was passing the ball and keeping possession, it was just good soccer the girls played really well," Allen said

Although they were able to put ten in the back of the net, it wasn't all offense as the Cowboys defense secured their first shutout of the season. Siriana Wilber was credited with the shutout for the Cowboys as not one ball got passed her, as the Roadrunners were able to muster up a couple of shot attempts.

"Siriana had a couple good saves but she didn't get too many shots on her, our defense was just amazing all night long, we did play a lot of total soccer which is what we wanted to play, we got everyone playing it was just a really total team effort." Allen said.

Allen also praised the efforts of his Sweeper Lucy Showers as he said she played a great game at the back of the Cowboys defense along with Brina Church who Allen said played a really good game as well. The Cowboys are off until September 5 & 6 when they head to Show Low for a tournament. The Cowboys will then return home on September 9 to take on the Payson Longhorns at 6 p.m. for their first home game of the season.