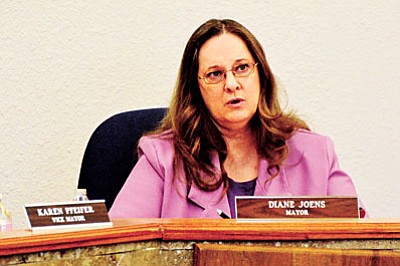 COTTONWOOD -- Diane Joens has filed a political committee statement of organization in her run for Yavapai County Supervisor District 3. The seat is being vacated by five-term Supervisor A.G. "Chip" Davis, who is running for District 1 State Representative.

A strong theme in Joens' campaign is connections and the importance of having the District 3 community coordinate regionally to make a bigger impact on the decisions of state and federal government.

"Creating multi-community collaborations, like the Verde Valley SciTech Festival, Stewards of Public Lands, or the Verde Valley Military Service Park, takes a whole bunch of people working together and that is my forte," Joens said.

Another huge issue is Interstate 17, according to Joens, who believes Northern Arizona needs to work together to get desperately needed upgrades listed on the Arizona Department of Transportation's statewide plan.

The League of Arizona Cities and Towns recently recognized Joens for 12 years of service on the Cottonwood City Council. She was first elected as a council member in 2003, then elected mayor in 2007, and re-elected in 2011. Her term on the council will expire the same time as the county supervisor term begins.

Joens' connections theme is supported by a District 3 community campaign team that includes Ginny and Steve Rench from Bridgeport, Teri and David Leibforth and Cindy Emmett from Clarkdale, Jim Iacovacci and Jason Valencia from Cornville, Phil and Dennise Rosen and Penny Frank from Cottonwood, Al Palmieri from Jerome, Brenda Man-Fletcher from Sedona-Village of Oak Creek and Susan Beach from Verde Village.

"It's going to be hard for anyone to fill Supervisor Davis' shoes," said Joens. "Representing the good people of District 3 will be both a challenge and a joy." She knows the intricacies of the position, having worked in the supervisor's office for four years, adding, "I think my experience there is beneficial to the citizens of District 3, and when I served, the district actually covered the whole Verde Valley."

The committee is already gearing up for the primary election on Aug. 30, 2016. "The campaign team is ready to roll," Joens said. "We will be out in force with nominating petitions. Our grassroots team is enthusiastically ready to get the word out."

Call or email Chair Cindi Kerber-Battisti at 639-0595 or cindib52@gmail.com to lend a hand.

"I would consider it a great honor to serve the citizens of District 3 as county supervisor," Joens said.