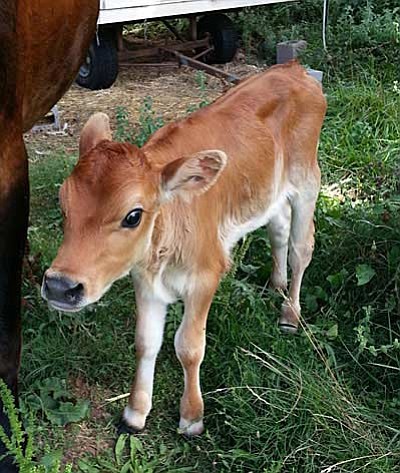 My new heifer Hannah Mae is two weeks old today. It's stunning to me how tiny she seems when compared to her big "brother", Georgie--my orphan calf who's five months old now. In the three years that I've had Jersey cows, I've had five little calves born on the farm but only one heifer, Hannah.

Now, I'm the first to admit that I'm a greenhorn when it comes to cattle. I know important things like, if the cow is mad at you she will step on your foot and stand there while you scream at her to move. Or that scratching behind the ears isn't as effective as scratching the lower neck. Or that if they eat the chicken food the next two days will be really messy. And I know how to hand-milk, something that five years ago I hadn't realized was missing from my repertoire of skills.

But until Hannah's birth I had no idea how great a difference there is between heifers and calves. The little boys were all born at around eighty pounds, while Hannah Mae was a spit at about forty. Even at birth, the boys were big across the chests with hefty upper legs and good sized hooves. Hannah dances across the pasture on long spindly legs, doing her pirouettes and leaps on her tiny little ballet-slipper hooves. Tiny those hooves might be, but they are still plenty hard.

The storm last night came with a blast of wind that tore a widow-maker out of the massive walnut tree behind the corral. Luckily, I was on the porch when it hit the ground. There's no mistaking that thundering roar as a huge branch impacts with my Mars-red soil. Praying that whatever had fallen hadn't destroyed any of my fences, I started down to the back pasture with the dogs and my headlamp for light. There was Hannah Mae, standing outside the corral. Mama Elsie (yes, I have a cow named Elsie) and Georgie were still in the corral. All I could think was that the sound had scared Hannah into crawling under the lower bar of the fence.

What ensued was something right out of Keystone Kops. Cursing myself for not having purchased a dog collar to use as a Hannah-handle--it's on the list, I went to put her rear-end drive into gear. If I can get behind her, I can use my hands on her back end to steer her into the direction I want her to go. She was too frightened to let me near her. She dodged, I darted. She turned, I slipped. Meanwhile, the dogs were checking to see if any squirrels had fallen from their nests along with the branch.

After what seemed an eternity, I thought maybe I'd let Mama out for some maternal help with this problem. Interesting idea, but fatally flawed. Being a greenhorn, I didn't realize that Hannah wasn't the only one who'd been scared by the noise. As the corral door opened, two wild eyed beasts, 1000 pounds and 500 pounds respectively, took off. At that point there was nothing to do but stand back and watch. 'Round and 'round the back pasture all three of them went until, silly me, I opened the gate to space where I keep the hay. That settled the two big eaters. They were back in the corral within the minute. I closed the gate behind them, leaving me with two useless dogs and Hannah Mae.

To her credit, Mama came to the gate as George began to eat. Elsie called. Hannah paced in front of the opening, but each time I reached to open the gate, she shied. At last, I lunged for her and caught her by a front leg. She danced back, twisting and turning, and found my foot with her back hoof. Although I didn't lose my grip, I fell to one knee with a muttered "ouch". Dang it, why do I never remember to change out of my better jeans before going down to the corral?

Once I was on my feet again, I grabbed her around her middle, lifted and turned her in the right direction, yanked the chain out of the notch, then pushed her toward opening as Mama called one more time...and she was in!

I breathed in relief, incredibly grateful that I had decided to come down to check on my animals. There's been a mountain lion hunting my property, snacking on the careless turkey hens who choose to nest where they shouldn't. With Hannah so small, she would have been easy pickings for the cat and that would would have been a devastating turn, a true cow-tastrophe for me.

Good-bye city life! Farming is the life for me.

Denise Domning writes, makes jelly and watches the weeds overtake her garden on her 8 acre farm in Cornville while tending to her 100 turkeys, 3 cows, 20-some chickens, 2 dogs and 8 cats.