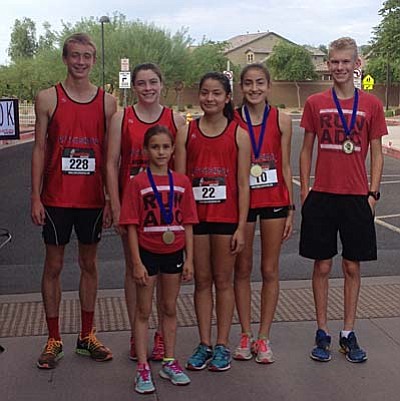 COTTONWOOD - The Aftershock Distance Club competed in their season opener this weekend racing in 5k road race in Waddel just off loop 303. The race started and finished at Mountain View Elementary. The Aftershock club is a local running club that is organized through USA Track & Field and compete year round. They compete in cross country in the fall, indoor track in the winter and outdoor track in the spring.

Jon Ulibarri was the 5th runner to cross the finish line in a time of 19:10.9. Karen Arellano finished 9th overall and was the 3rd female to finish the race as she timed in at 20:20.1. 8-year-old Jenna Caccia just joined the Aftershock club three weeks ago and was able to do well in her first race. Caccia won her age group, was the 9th female to cross the finish line and finished 29th out of 83 competitors. As it was the first meet of the season for the club, Coach Micah Swenson said it was a good opener for the club to be able to see where everyone was at.

"Karen was pretty sick a couple weeks ago and missed 7 days of training plus the 4 days we had to ease her back in. She should look much better by the 18th when we go to Tucson," Swenson said. "She still looked pretty good and had a great final 200m where she outkicked Joel Chavez, a senior boy who runs for Willow Canyon HS. There were several runners there from Willow Canyon HS."

Karen Arellano is one of two Aftershock runners heading into their senior year of high school. Karen and Penny Fenn will most likely be signing letters of intent for college at some point this year. Penny and Allyson well be looking to repeat as Cross Country All-Americans again this December. Swenson says both have a great shot at running a sub-18 minute 5k this fall.

The Aftershock runners will head down to Tucson on Friday, September 18 for the Dave Murray Cross Country Invitational that is held by the University of Arizona. The race will take place at the Del Ulrich Golf Course in Tucson, and the race will begin at approximately 5 p.m.