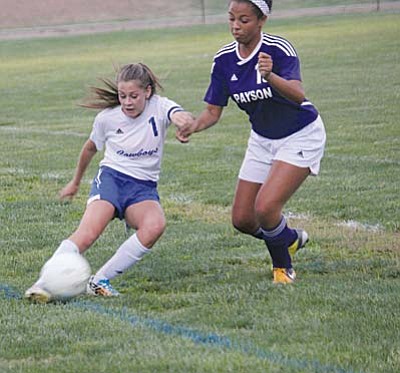 Camp Verde captain Raiven Alvey saves a ball from going out of bounds during the first half of their game on Wednesday.

CAMP VERDE - After taking home their first win of the season 10-0 against the Holbrook Roadrunners, the Camp Verde Girls Soccer team traveled to Show Low for two games this past weekend. The Cowboys took on Blue Ridge in their first of two games. Camp Verde was able to put one in the back of the net in the first half but the Yellow Jackets were able to counter with three goals. Blue Ridge added two more goals in the second half to Camp Verde's one on the way to a 5-2 Yellow Jackets victory.

It was much of the same for the Cowboys in their second game when they faced off with Round Valley. The Elks came out strong in the first half putting three in the back of the net to Camp Verde's one. The Cowboys were able to stymie the Round Valley offense somewhat in the second half, only allowing one more goal on the way to a 4-1 Round Valley victory.

After their trip to Show Low. The Cowboys squared off with the Payson Longhorns for their first home game of the season and it was the Cowboys' night.

They spent majority of the game pressuring the Longhorn defense with deep runs to the corners and great passing through the middle. Raiven Alvey was the main culprit, creating many opportunities for the Cowboys while Brina and Paige Church held down the middle of the field for Camp Verde.

The first opportunity came only three minutes into the game when Alden Teeters broke away from the Longhorn defense but her shot was just wide. Two minutes later, Alexandra Schaffer found Alvey on a cross but the ball wound up just wide of the goal. On the ensuing goal kick, Church was able to corral the ball around the 30 yard line and rip a shot that soared just over the crossbar.

The Longhorns created their first opportunity on a breakaway when the Cowboy goalkeeper came out of her box to try and clear a loose ball. Payson forward Aubrie Paulson was able to get around the keeper and was off to the races, but that didn't last long. The Cowboy defenders were able to stop the Paulson in her tracks and force the ball out of bounds.

Two minutes later, Paige Church was able to find a teammate on a through ball, only to have the ref raise his flag signaling offside's Church created an opportunity of her own a couple minutes later when she took a shot from 40-yards out that hit the bottom of the field goal post and ricocheted back into the field of play.

Alvey had another opportunity to put the Cowboys ahead when she received a pass at the top of the box and let the ball carry through to her right foot. She pulled a nifty spin move and took a shot that ended up just wide.

The two Cowboy captains Church and Alvey connected later in the half. Church found Alvey on a beautiful through ball that Alvey put over the net after being pressured by a Longhorn defender. It was a minute after this opportunity that the Cowboys got their first lead of the game.

Alvey broke down the right sideline and ripped a lofting shot that looked like it was headed for the left side netting of the goal. The Payson goalkeeper made a great fingertip save only to have Teeters ready and waiting to clean-up the garbage and put the ball in the back of the net.

With :21 seconds left in the first half the Longhorns found themselves in another great position to score before Camp Verde Sweeper Lucy Showers made a great stop to take away another opportunity for the Longhorns. The Cowboys went into the half up 1-0, controlling much of the possession of the first half. This created more opportunities than they could count.

The Longhorns would even the odds though in the second half. With 25 minutes left, the Camp Verde Goalkeeper came way out of the goal mouth to try and clear a ball. Paulson ended up getting there first and dribbling around her. Paulson was contested by the strong Camp Verde defense but she wouldn't be denied this time and put the ball into the back of the net.

The Cowboys would come right back though and keep the pressure on the Longhorn defense. They had a series of shots from inside the six that forced the Payson keeper to hold the ball on the goal line, inches away from the Cowboys being up 2-1. Six minutes later, Alvey almost put one into the back of the net. She sent the ball to the upper left corner of the net, but the Payson keeper ended up making another great save.

At about the 10-minute mark the Cowboys were awarded a corner kick. The Payson keeper made another save that left the fans in awe once again. Schaeffer found Brina Church at the 6-yard box off the corner kick, and she ripped a shot. The Payson keeper ended up with the ball in-between her legs for yet another one of her many saves of the night.

Payson wasn't able to keep the Cowboys or Alvey out of the back of the net any longer. With 8-minutes and 30-seconds left, Alvey got another of her many opportunities of the night. This time she capitalized. Alvey was able to slip behind the Longhorn defense around the 30-yard line after a beautiful through ball. It was between her and the keeper. She ripped a shot from just inside the 18-yard box. This goal put the Cowboys in the lead.

The game wasn't over though, the Cowboys kept up the pressure for the next 7-minutes and 30-seconds of the game. The Camp Verde keeper came way out of the goal mouth again, only to have a Payson forward beat her to the ball with only a minute left in regulation. The Cowboys defense challenged the shot, but to their dismay, the ball would end up in the back of the net. With the ending score tied at two, the game went into overtime.

The first overtime was a lot of back and forth between the two teams. Alvey put one off the crossbar, and the Cowboy defense made a stop inside the 18-yard box with seconds left on the clock in the first period. The Longhorns had two opportunities in the second period of overtime to take the lead. Showers would play spoiler to one. The rest of the Cowboys defense was able to thwart the second Longhorn attack when Aubrie Paulson would push a shot wide with 6-minutes left. Alvey had an opportunity on a free-kick with 4-minutes left but it would end up unsuccessful. The game ended in a double overtime tie between the Longhorns and the Cowboys.

The Cowboys next game will be on the road on Saturday as they head to Desert Christian.