Life in the slow lane blog: I'm eating my greens 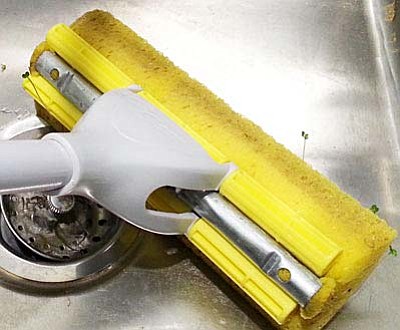 One of the hardest things for me to give up in my recent divorce, when I became the only farmer here, were my gardens. But the choice had to be made between animals or vegetables, and feeding my animals meant making sure I hit the computer at least half a day every day. It was a really difficult choice. I feel most alive when my fingers are deep in the earth. Moreover, I've spent the last five years turning this compacted, lifeless red soil into something browner and richer, filled with earthworms and the fine white filaments of mycorrhizae. The areas I've concentrated on are now free of most of the goathead burrs and the silver nightshade, thank you, turkeys and chickens! Unfortunately, when one plant goes, another takes its place. I got quack grass, European Horehound and something that everyone around here calls "sand burrs." The cows love the quack grass, but avoid the horehound and the burrs even when it's nothing but grass. I guess I could use the horehound to make cough syrup, but I really don't think the world's ready for tons of "Oak Creek Cough-Be-Gone."

So now, my ever-bearing raspberries are buried in quack grass on the upper hillside, while the same three-foot-tall grass is taking over the middle hillsidewhere I have apples, mulberries, jujubes, artichokes and elderberries along with fennel and French sorrel. It's hardest to watch the Bermuda grass reclaim the front acre of the flat portion of this property. This is where I'd been doing my serious growing and from which I've sold produce in the past. I've got everything there, from fruit trees to blackberries, chard to lettuce, melons, squash, tomatoes and all the stuff you think of when you think "farm."

But my farm plants are fighting back! Holding their own are the artichokes, the herbs, the tat soi (which is great in chicken soup if you've never tried it), the asparagus. But the most resilient of all my additions is Arugula. I'd never really eaten Arugula before I started growing it, and the few times I'd had it was in a salad. To me, it tasted more bitter than peppery as usually advertised. But I planted it because I'd read that it, along with chicory, fennel, Daikon radish and parsnips, were plants that help restore depleted soil. The Daikon managed to survive for a year, but never went to seed because the cows loved them. The fennel struggles but I still have those wonderful licorice tasting plants that Thomas Jefferson called "dessert" spreading slowly in the areas where they've managed to form seed heads. This is the year for chicory. Helped along by this summer's rain I have stalks of cornflower-blue flowers showing up on the edges of the fields. The parsnips were a complete bust. I suspect they need a little more cold than they get here.

But by far, Arugula is my biggest success. It grows in the summer and in the winter, even when covered by snow. I have plants in great green swaths covering my hillsides, sprinkled into my walkways and even sprouting in thick layers in my little flower garden in front of my kitchen door. Hardy isn't the word for this plant. Unstoppable might be a better description. I think it may even out-compete the Bermuda grass given a chance. It'll even grow in my sponge mop, should I be foolish enough not to sweep up all the seeds I spilled while transferring them from pod to seed sack before washing the floor.

Since the Arugula has become so prolific I've gotten a lot more creative with it, especially now that I've discovered it's much better tasting cooked than raw. It goes into all my soups, stews and hot dishes. (If you're not Scandinavian, "Hot Dish" is a sort of stew made with ground beef, veggies and tomatoes, usually with noodles added. I suspect they see a lot of "hot dishes" at potluck dinners up in Lake Woebegone.)

So, while this year's been a bust for the tomatoes and cukes I usually enjoy, I'm eating my greens. Free is good and good for me, too.