Globe hands Cowboys third loss of season, but it may be turning point for Camp Verde 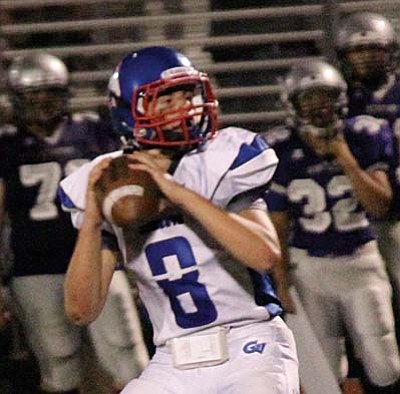 Cowboy QB Payton Sarkesian gets set to throw with pass protection from Jaysen Leonard during their game at Sedona. VVN file photo by Greg Macafee

CAMP VERDE - The Camp Verde Cowboys traveled to Globe Friday night to take on the Tigers in their third game of the season. Head Coach Steve Darby said it was tied 20-20 going into the 4th quarter and the Cowboys had led most of the game. Globe was able to score two touchdowns in the last four minutes that put the game out of reach. The Tigers handed the Cowboys their third loss of the season but Coach Darby believes it might be a turning point for his Cowboys.

"I believe the team has grown up and matured, this was our toughest opponent yet and the kids gave it everything they had we just kind of ran out of gas at the end," Darby said.

With Globe boasting a much larger roster, not many players played both ways for the Tigers. On the other side, the Cowboys had many players not leaving the field. Coming into the game the Cowboys were short 8-10 players due to academic ineligibility. The Tigers averaged close to 260 pounds across their defensive and offensive line coming in much bigger than the shorthanded Cowboys.

The Cowboys were able to stay with the Tigers though. Dakota Brueland was able to find his way into the end zone twice on the ground, while Jaysen Leonard added another one for the season. Payton Sarkesian was also able to find Ryan Loza in the back of the end zone for a touchdown as well. Leonard finished with 105 yards on the ground and 70 yards receiving. Sarkesian was another top performer for the Cowboys racking up a total of 227 total offensive yards. He finished with 77 rushing yards and 140 passing yards.

On the defensive side of the ball, Reyes Herrera was able to rack up 12 tackles with a couple sacks and Bryce Wantland contributed 12 tackles as well for the Cowboys. After what could be their best performance of the season yet the Cowboys will be home on Friday for their Homecoming game. They will face off with the Pinon Eagles to try and obtain their first win of the season. Kickoff is set for approximately 7 p.m. on September 18.