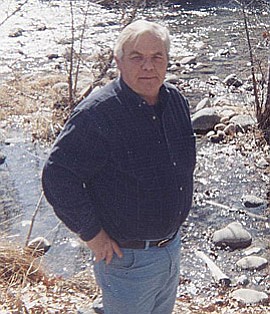 Bill Moore, age 74, of Cottonwood, Arizona passed away September 7, 2015 in Cottonwood. He was born December 21, 1940 in Paris, Illinois to Albert and Mary Meyers Moore. Bill graduated from high school in Skagway, Alaska.

Bill spent 4 years in the U.S. Air Force working with atomic weapons and ejection seats. Following the Air Force he worked for NCR in El Paso, Texas working on early computers that were the size of a room and you walked into them to repair them.

In Winslow, Arizona, he had his own electronic repair shop. Lastly, he worked 20 plus years for W.L. Gore in Flagstaff, Arizona as an electronic engineer. Bill retired at age 65.

Bill enjoyed riding and repairing motorcycles and target shooting with his son, Larry. He loved his children and puttering in his workshop building with his CNCs.

His Memorial service will be held at the Cottonwood Bueler Funeral Home Chapel at 3:50PM on Saturday, September 12, 2015 for family only. Interment will be at the Valley View Cemetery in Clarkdale, AZ.