A brand new key: Jeordie to perform at Sound Bites Grill on Sept. 19 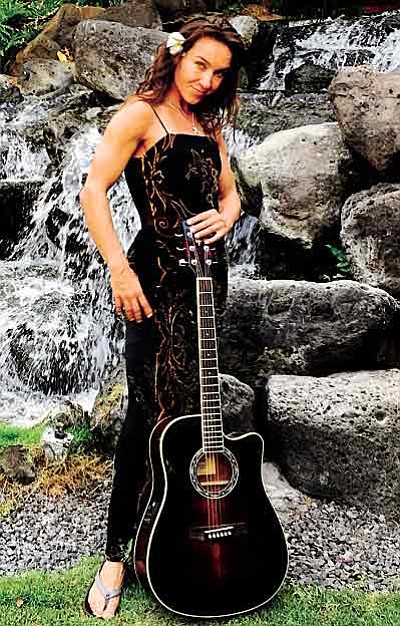 Jeordie, a fantastic country-folk rock singer and guitarist, steps out of the shadow of her very famous mother, Melanie, to sing in her own "Brand New Key" at Sound Bites Grill at 7 p.m. Saturday, Sept. 19.

Melanie is the voice of her generation of Baby Boomers who grew up during the Kennedy assassinations, the Civil Rights movement, race riots, Dr. King's assassination, the Vietnam war, Watergate, and Days of Rage on college campuses.

In the summer of 1969, two events defined these rocky times: American men were the first people to walk on the face of the moon and the Woodstock Music & Art Fair, a three day music festival, allowed a legion of young musicians to sing protests as well as calls for peace and love.

Melanie, whose song "Beautiful People" about caring for (and about) those around us, became the beloved anthem of this "Summer of Love."

At Woodstock, her song had the distinction of being the first to be honored by a concert audience raising their candles and cigarette lighters in a glorious ballet of dancing light.

Melanie's daughter, Jeordie, is the voice for this generation of Millennials. Like the Boomers before them, this generation seeks to nurture peace and love between people representing a rainbow of colors, continents, climates, and creeds.

Based on a platform of lusciously melodic, sultry rock, Jeordie's lyrics offer the listener encouragement to build peace bridges as well as offering deep (but very friendly) advice. Whether she's singing a positive and upbeat ditty or an introspective song from her heart, Jeordie's lyrics invoke vivid visual imagery.

Jeordie's rock songs wander a bit over into country and her country songs are often tinged with folk music nuances. Her voice, which is infused with her mother's folk vibrato in the upper register, hearkens back to the vocal style of Joan Baez and Jewel.

Jeordie's voice is so pure, like a cold, mountain stream dancing over pebbles on its way to the sea, that she has no need of any studio "magic" to correct her voice or acoustic guitar performances. That is a rarity in the music business today. It is her way with a song, whether her own or a cover, that brought her to the attention of major musical stars. In fact, Jeordie performed as the supporting act for strong women singers such as Dido, Indigo Girls, Sade, and Jewel. The famous country duo, Brooks & Dunn, asked Jeordie to sing at their Country Circus in Phoenix, Arizona. In 1998, Jeordie sang at "A Day in the Garden Woodstock Reunion." She has been a featured performer at the Kerrville (Texas) Folk Festival, the Winnipeg (Canada) Folk Festival, numerous state fairs, and music festivals. Currently, Jeordie lives in Tempe, Arizona, and performs throughout the Southwest with her band. Jeordie's stop at Sound Bites Grill is to promote her new live CD, "Bootlegs."

Sound Bites Grill is a modern day Supper Club. Make dinner reservations and make an evening out of it. Call 928-282-2713 for more info or visit www.soundbitesgrill.com.