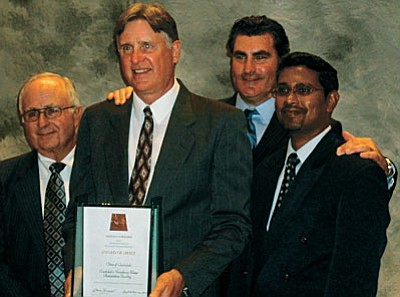 CLARKDALE - The Town of Clarkdale earned an environmental Award of Merit for taking a former City of Surprise reclamation plant and turning Class B effluent into Class A+ effluent, with room to triple future expansion.

"It's quite an honor. We are very pleased, very happy. It was a team effort," said Wayne Debrosky, utilities and public works director for Clarkdale.

The 35th Annual Arizona Forward Environmental Excellence Awards Gala was held in Phoenix on Saturday, Sept. 12, 2015. Over 120 nominations were considered, with 31 earning an Award of Merit.

The event spotlights projects throughout the state of Arizona that demonstrate a high level of environmental commitment and contribute to the region's overall sustainability.

"We started discussions for the project in 2011. It was Fred Goldman who came up with the idea of recycling the wastewater treatment facility and Felix Construction who relocated and built the facility," Debrosky said. "SEC, Inc. was the design firm and WIFA (the state's Water Infrastructure Finance Authority) financed us and nominated us for the award."

The project involved moving the former Desert Oasis Wastewater Treatment Plant from the City of Surprise to Clarkdale. Home builder Pulte had last used the plant to treat water in one of its subdivisions as it awaited hookup to an updated system in Surprise.

"We wanted the same people who built the system to disassemble and reassemble it here. Just a lot of things had to come together," said Debrosky.

The Broadway Water Reclamation Facility came online in the spring of 2013.

The plant replaced an inadequate lagoon treatment system that had a 250,000 gallons-per-day capacity and produced a Class B effluent that still contained nitrogen.

According to the Arizona Water Department, effluent is rated Class B if the concentration of fecal coliform organisms is less than 200 / 100 ml in four of the last seven daily samples.

The updated plant produces 350,000 gallons-per-day of Class A+ effluent with no nitrogen. The standard for a Class A+ effluent is no detectable fecal coliform organisms in four of the last seven daily samples.

Per Debrosky, this was accomplished through biological stabilization of wastewater and biological removal of nitrogen without the use of external chemicals.

"We have enough space to accommodate new homes as they come in at Mountain Gate and Crossroads at Mingus subdivisions," Debrosky said. "We can expand from 350,000 gallons-per-day to 1 million gallons-per-day. It has expansion built right in."

Clarkdale Town Manager Gayle Mabery is relieved that a solution was found to effectively treat the town's wastewater.

"While the additional capacity of the plant certainly positions the town to add some new customers to the system, the most important benefit was the resolution of our long-standing effluent quality issue," said Mabery.

"It was clear for a long time from the state's environmental regulatory agencies that Clarkdale had to get our effluent quality issues addressed, regardless of whether we added one new customer or not," Mabery said.

The Broadway Water Reclamation Facility project was financed through a combination of developer contributions, customer rate increases and low-interest financing through WIFA.

"Financing the project had always been the hurdle for Clarkdale. We are really proud of the creative approach to design that finally allowed us to construct something that would produce A+ effluent at a more affordable cost than had ever been an option," said Mabery.

"The project itself has really placed the town in a better position for economic development and protecting the Verde River. It was a win-win project," said Debrosky.