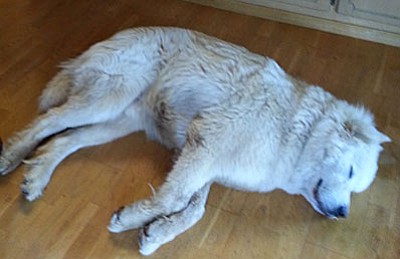 "Bear in his natural state."

Not a skunk because the smell is more musky than that but equally potent.

First, an explanation. Moosie isn't Moose. His name was Moose when we all thought he was a St. Bernard/Husky mix. But when he stopped growing at 80 pounds it was clear that the name "Moose" would never fit him.

Thus he became Moosie--a smaller version of the antlered behemoth that wades in the lakes and ponds of North America. And for those who don't know Akitas were bred for Bear hunting and Shar Peis were originally Boar hunters. To say Moosie has no fear is an understatement. Now counter that with my 115 pound Hungarian Kuvasz Bear with the heart of a...I don't know...mouse? The Kuvasz is a livestock guardian breed, but Bear sort of missed the memo on that. Between the two of them they create a complete dog. Bear identifies the threat, looses his magnificently deep and scary bark, then looks at Moosie and says "Go get 'em, little guy. I've got your back!"

So it's not unusual for Moosie to kill--and sometimes eat--the things he kills. He's done in 5 raccoons, way too many chickens, some very expensive turkeys as well as numerous gophers, crayfish, bullfrogs, mice, rats and squirrels. And one trout. He caught it in the ditch when the water was low, which tells you how fast he is. I gutted it for him, but he looked at me and said, "Naw, I'll kill 'em but I'm not eating those." The cats were thrilled.

Last night was a loud night. Although Bear barks to hear his own voice, last night Moosie was barking too. That's when I know there's a real threat. Having seen the bobcat a few nights back and knowing that my neighbors often see the mountain lion (Moosie isn't the only animal who's killed my turkeys), I went out to walk the property. This is the habit Moosie and I have formed, and how I give him permission to hunt.

The dogs came with me, scouting the fence line. From their reactions I knew whatever it was out there was dangerous. I figured it was the lion.

This morning when I got up, Bear was on the porch (he's excellent at guarding the porch) but there was no Moosie. Uh-oh. Although I have a good portion of my property fenced, the part where I keep the animals, Moosie keeps discovering escape hatches. Worried, I went to do my morning chores. By the time the turkeys and chickens were wandering there was still no sign of Moosie, My worry was morphing into fear. I wouldn't put it beyond Moosie to chase a coyote back to the pack. Then Bear went to the irrigation ditch, which runs like a hip-deep river through my property, and looked up onto the hillside, to where several turkey hens had had nests before they were taken by the big cats. There are still piles of rotting eggs up there. I should clean them up but they're deep in blackberries and I'm not going in there, I'm just not.

When I got to the top of the hillside, I choked. The smell was awesome in its stink. Moosie appeared over the wall in a noxious wafting cloud, his ears down and mouth stretched into his usual goofy morning grin.

Something rustled on the hillside and like a flash, Moosie was gone over the wall again and into the prickles. A cat-like yelp was followed by a distinct "POP". Moosie grabbed whatever it was and shook. The stink got worse. Bear went over the wall into the berry bushes, stuck his nose into the fray then beat a hasty retreat. The big dog and I left the little guy to his business, retreating to where the air was more breathable.

Good work, Moosie...I think. But what was it he had? I've seen otter, beaver and muskrats in the ditch, and I know there are a lot of skunks around here. And I'm sure that those turkey eggs are quite the draw to such critters. So I went to my go-to research source (whatever did we do before Google?) to see which of those creatures might have made that popping sound.

That's when the confusion started. From everything I read, Weasel-like animals don't actually pop. The sound-making weasel is a tool called the Spinner's Weasel that attaches to the reel onto which newly spun thread is wound. The device has a clock-like face with a pointer that "pops" every 40 yards, giving the spinner a count of how much thread they've spun.

But this critter, whatever it was, definitely popped. Surely, they wouldn't have named this popping device a "Weasel" if weasels didn't pop. One thing is certain. I'm not going in there to find out. Even if it weren't in the blackberry patch, the stink is enough to keep me at a distance.