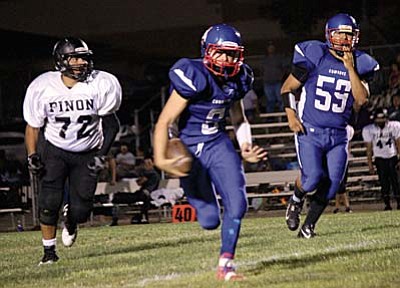 CAMP VERDE - Last week, Camp Verde Head Football Coach Steve Darby said their loss to Globe may have been a turning point in the season.

His Cowboys backed up that statement Friday night earning their first victory of the year, 50-0 over the Pinon Eagles. "Belated" was how Darby described the feeling after their first win of the season.

"We have had three games that we could have won, they were very close, I feel that Globe was a turning point," Darby said. "Even though we lost, that was the best opponent we have come up against and the best we've played. We are just a very young and inexperienced team and they are just getting better by leaps and bounds. Every game they are showing new things we want to carry that momentum into Monument Valley next week."

It didn't take long for the Cowboys to get on the scoreboard Friday night. Two minutes into the game Pinon sent off their first punt of the game.

On the first play from scrimmage, Peyton Sarkesian found Ryan Loza on a short pass in the slot for a 38-yard gain. After a couple run plays that moved the ball, Sarkesian found Loza again on the same play, this time Loza scampered for 22-yards and a touchdown.

Two minutes later, Sarkesian seemed like he was about to take off on a quarterback scramble. As he was about to get hit, he made a beautiful pitch to a waiting Jaysen Leonard who finished off the run for a 10-yard score. This wasn't the only time Leonard would get into the end zone.

On the next drive for Pinon, Jesse Etietinne recovered a fumble and the Cowboys offense charged back onto the field for their third drive. The Cowboys moved their way up to the 2-yard line and Leonard dashed his way into the end zone for his second touchdown.

Camp Verde was up 18-0 with 3 minutes left in the first quarter.

The ensuing kick-off turned out great for the Cowboys as the Pinon returner fumbled the kick-off and the Cowboys pinned them on their own 5.

Another fumble recovery by the Cowboys allowed them to take over Pinon's 10-yard line. Camp Verde would extend their lead at the 11-minute mark of the second quarter.

Sarkesian connected with Trevor Heyer for his second passing touchdown of the night. This time from 11-yards out. After the game, Darby praised Sarkesian for his play so far this season.

"Peyton is a sophomore, he's young but he's gaining a lot of experience, every game," Darby said.

Sarkesian finished with 277 yards total. Racking up 261 yards through the air on 13 completions and 15 attempts, three of those completions leading to touchdowns.

As the Eagles came back onto the field after the Heyer touchdown, the Cowboys kickoff ended up bouncing out of bounds. This would put the ball on the 40 and it would mark the first time the Eagles passed the 30-yard line in the game.

15 seconds later, Etietinne put his mark on the game once again. Etietinne picked off a pass and took it 37-yards to the house to put the Cowboys up 30-0 with 10:46 left in the half.

After another Pinon punt, the Cowboys put another score on the board.

Leonard scampered into the end zone from 25-yards out this time, for his third score of the night.

The star running back for the Cowboys has earned nothing but praise from Darby, as this was only his fourth ever football game.

"Leonard is just getting better and better," Darby said. "This is only his fourth game ever and he's showing us great things."

Leonard finished his fourth ever game, with 127 yards on 11 carries, and three touchdowns. He also added a receiving touchdown before the end of the first half.

With six minutes to go in the first half, Dakota Brueland got two touchdown runs called back due to a holding call and a personal foul call.

Leonard made a nifty one handed catch in the flat on the next play, and danced his way into the end zone from 26-yards out to put his final touchdown on the board.

This ended up putting the Cowboys ahead 43-0 going into halftime.

From the very beginning the Cowboys were fired up and excited to be playing on Homecoming weekend.

Darby attributed the excitement to one of the best weeks of practices he's had as a coach.

"We had a great week of practice, we did a lot of hitting drills and the kids were fired up, they were very intense," Darby said. "It was probably one of the best weeks of practice I have had in my coaching career. I think that is the big thing, and plus even though we lost to Globe we had a lot of momentum coming out of there and the kids were pumped up."

In stepped Brueland, who broke a run to the outside, juked two or three defenders, made one final cutback and scampered into the end zone untouched.

This put the Cowboys up 50-0 and Camp Verde cruised to victory from there. Taking home their first victory of the season.

The Cowboys finished the night racking up 261 yards through the air and 290 yards on the ground. The rushing was split between 8 rushers.

Brueland finished with 79 yards on the ground.

Sophomore Ryan Loza was the big target in the receiving game, tallying 154 receiving yards on 6 receptions.

Trevor Heyer was second on the list with thr receptions for 27 yards and a touchdown. Heyer also gained recognition from his coach for his contribution to the running game.

"It doesn't show on the scoreboard, but guys like Trevor Heyer, we didn't have him last week and we did this week," Darby said. "He really made a difference, his perimeter blocking is off the charts, it's not something we talk about a lot but he deserves a lot of credit. He helped make a lot of those plays that went to the end zone."

On the defensive side of the ball the Cowboys earned their first shutout of the season.

Etietinne led the way for the Cowboys with 7 tackles, 2 sacks and one interception.

Jordan May and Kevin Oothoudt both added 5 tackles for the Cowboys. Reyes Herrera added two more sacks for Camp Verde.

And Tyree Leonard, Miguel Salas, Jordan May and Kolby Hedges all added on sack as well. The Cowboys head to Monument Valley next week to take on the undefeated Mustangs.

On Friday, the Mustangs took on the Holbrook Roadrunners. Monument Valley defeated Holbrook 17-13. Holbrook handed Camp Verde their first home loss of the season back on August 28.

Cowboys move to 3-4 after victory over North Pointe Prep
Roadrunners speed by Cowboys
Globe hands Cowboys third loss of season, but it may be turning point for Camp Verde
Cowboys ride past Cougars
Cowboys fall to #2 Joy Christian