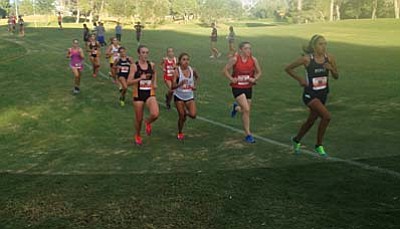 "She ran her opening mile at 5:57, very close to what we were targeting. We felt like this would put her in a great place to handle mile 2 effectively and still have enough left to run a strong 3rd mile," Swenson said. "Many athletes have to work so hard over the second mile of this race that it makes for a very painful experience on mile 3. We were shooting for mile splits of 6:00, 6:30, and 6:00. The middle mile of this race is extremely tough with somewhere around 15 inclines that really beat up the legs. There's really no way to get into and maintain a rhythm over that mile of the race. Penny was mentally tough and ran a race that was both gutsy and smart."

After her 5:57 opening mile, Fenn was able to race the second mile in 6:26 and her third mile in 6:01 which was right along the splits that they were shooting for. Fenn finished 19th out of 50 runners, running a 6:09 mile pace and beat her time from last year by 58-seconds.

Allyson Arellano was another runner who competed in the Dave Murray Invite for Aftershock. Allyson was the fastest out of the gate for Aftershock, running a 5:50 first mile, but had a tough 2nd and 3rd mile finishing 25th at 19-minutes and 4-seconds.

"Allyson was right on the money in her first mile but had some trouble in the middle part of the race. We sat down and really analyzed things," Swenson said. "We talked about the race itself and look back at our last 2 weeks of training to see where we might have gone wrong. I was impressed with how she battled despite her struggling. Even with such a bad race by her standards, she still finished ahead of NAU's #3 runner and beat out 10 NCAA D1 athletes."

Allyson's sister, Karen Arellano was the third runner that competed for Aftershock at the Invite in Tucson. Swenson said that Karen got out a little faster in her first mile than he would have hoped for.

"She was able to find a strong pack of runners to run with, so it made sense for her," Swenson said. "The one thing I do like about all 3 runners is their ability to take our race plans and make intelligent and appropriate minor adjustments on the fly. This is a real testament to their race savvy and experience."

Penny's 19th place finish was the highest place finish that the Aftershock club has ever had at the Dave Murray Invite, along with the fastest time as well. 31 out of 50 runners that competed at the invite were NCAA Division I runners and Fenn was the first non D1 runner to finish the race. All three runners beat D1 competitors, Penny finished ahead of 13, Allyson ahead of 10 and Karen finished in front of two. Swenson still gets a kick out of hearing the Aftershock club being announce with D1 programs.

"I still get a kick out of the announcer at this meet as he names off the teams and their starting boxes. I can't help but grin when he says Aftershock Distance Club" in the same way he says "University of Arizona," "Arizona State," and "Northern Arizona." It lets me know we belong and can compete at this level," Swenson said.

For their next meet the Aftershock club will compete in Casa Grande at the Desert Twilight Cross Country Festival on October 2. After their competition on the 2, they will head to the Mesa Thunderbird Classic in Mesa on October 10.