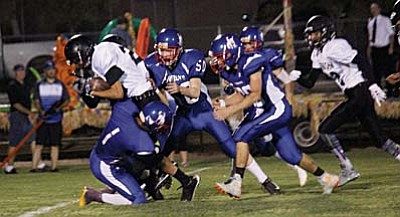 Trevor Heyer is assisted by teammates in bringing down a Pinon player during their game last Friday. Heyer brought down two interceptions and rush for a touchdown on Friday vs Monument Valley. (Photo by Greg Macafee)

CAMP VERDE - The Camp Verde Cowboys traveled to Monument Valley Friday night to take on the undefeated Mustangs. The Mustangs scored 15 points in the first quarter and never looked back, as they went onto win 37-6.

It was a rough night for the Cowboys as they turned the ball over eight times.

Five turnovers came via fumble, and three came by interception.

The Mustangs were able to control the line of scrimmage all night beating the Cowboys off the ball on most of the plays. Without much time to throw both quarterbacks,

Heyer finished with the only Cowboy touchdown of the night scrambling into the endzone after a broken down pass play.

Senior Jaysen Leonard was another bright spot for the Cowboys racking up 68 yards rushing on 11 carries, and had 53 yards receiving.

Camp Verde is back at home next week to take on Chino Valley at 7 p.m.

Chino Valley is coming off of a 31-14 victory over Tuba City, their second win in a row after beating Sedona Red Rock last week.