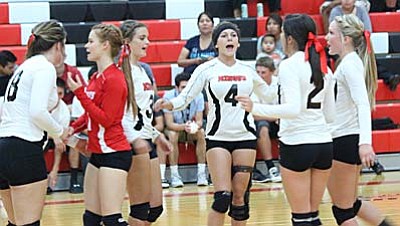 The Mingus Volleyball team celebrates after gaining a point during their game against Tuba City earlier this season. The Marauders gained their first two victories this season beating Page and Mayer. (Photo by Greg Macafee)

COTTONWOOD - After a long stretch of games without a win to begin the season, the Mingus Girls Volleyball team was looking for a win, and last Tuesday night their first win when they traveled to Mayer. The Marauders carried that momentum into their second match of the week as well as they defeated Page last Thursday for their second win of the season.

The Marauders went into Mayer and never had a doubt in mind winning three straight games to take the victory back to Mingus. It was a great all-around performance for the Marauders. According to Maxpreps.com Kiana Kreiner led the way in kills with 12 and junior Quin Thompson finished with seven. The defense for Mingus was just as stellar with Thompson leading the way with six blocks and Jaylen Reay adding five for the Marauders. Tori

"The girls are starting to communicate and work together as a team implementing their skills and staying strong under pressure," said Head Coach Loraine Roethler.

After their win at Mayer, the Marauders brought the winning spirit back to their home court last Thursday when they took on Page.

The first game of the match took a little extra from the Marauders as they won 26-24, having to gain an extra point to win by two.

The Marauders went on to lose the next game 14-25, that was the only game the Marauders conceded though as they went onto win the next games 25-15, and another nail biter in the fourth game 25-23. Again, Kiana Kreiner led the way for the Marauders on the offensive side of the ball with 12 kills. Junior Jamie Langley followed with eight, while Quin Thompson and Marina Diaz both followed with four according to Maxpreps.com.

The Marauders were able to rack up 29 total assists with Kaylee Gordon and Marina Diaz leading the way with seven and six. On the defensive side against Page, Tori Fanning and Ailyn Perez came up big for the Marauders. The two seniors combined for 19 of the teams 25 digs according to Maxpreps.com. Fanning finished with 11 while Perez finished with eight. Quin Thompson and Jaylen Reay each had two blocks for the Marauders. With a two-game win streak, Roethler hopes the team will continue to improve as the season continues.

"The expectations are to grow and improve every game, and we are making progress meeting our goals.  We are monitoring our errors to improve and minimize them," Roethler said.

The Marauders hope to continue their winnings ways as they host the Sedona Red Rock Scorpions on Tuesday before having a week long break when they head to Bradshaw Mountain on October 6.