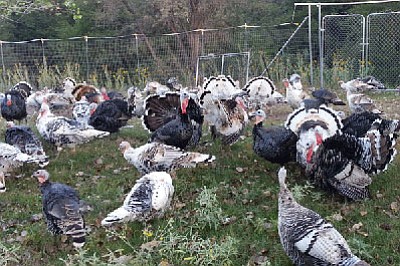 Finally! The weather is cooling off and the mornings are glorious-almost cool enough that I could use a jacket. The only downside to the beginning of Autumn is the new tension that's overtaken the farm. You see, they start out as little puff balls, but more than half of them grown into tom turkeys.

Don't know the difference between a tom and a hen? The toms are the ones that gobble. If I laugh loudly at them, the toms will all gobble back in response. It's sort of like having my own sitcom laugh track.

The toms also fan out their tails, and, like the prairie chicken, they have a membrane in their breasts that they can fill with air then release with a distinct "poof". It's kind of a bagpipe without the screech.

And, of course, they fight with the other toms. Oh yes. The testosterone has hit the fan.

For the record, turkey hens can be just as rough and ready as the toms.

They'll make a show of feathers, grab each other by the skin of the neck and twist viciously. This summer I even had a hen confront a Black Hawk. I have a pair of Black Hawks that nest nearby. They're a funny hawk because, unlike the myriad other hawks, falcons and #!%$ ravens that survey my livestock, these guys aren't flying hunters. Instead, they hang out in the trees and wait for prey to pass beneath them, then drop down to snatch it. This ploy worked better on the Blue Heron, who consistently lost whatever he/she had just fished out of the creek-the Black Hawk was literally stealing food out of its mouth. That ploy didn't work so well with my turkeys. As the hawk plummeted toward the babies, one of the hens took off. Backstroking her wings, she came flying up breast first, and crashed into the dropping hawk. Needless to say, the Black Hawk beat a hasty retreat. She was the bigger bird.

Back to my too-many toms. At five months old my little lads are now all teenagers. If you've raised children, then you know what this means.

They beginning to think "SEX"! They start playing "boy" games That means fanning the tail, puffing out the feathers, and shifting the colors of their heads from red to white to blue as quickly as possible.

By the way, this is why Benjamin Franklin wanted the turkey as our national bird-because their heads reflected the colors of our flag, sometimes all at once.

I'm not looking forward to next month. That's when the dancing will start. If you've ever been to a Powwow and watched the heavily feathered guy strut his stuff, you know what a tom turkey looks like when he does his mating dance. The feet pound, right a few times, then left. He spreads his tail feathers, shifting the fan from one side to the other. His wing tips scrape the ground (so much so that my precious Tom has permanently flattened wing tips-he's worn off the curves) as he turns, shifts and prances. That dancing is serious business. It says "Ladies, I am the one and only guy for you."

And here's the deal. If that particular tom thinks he's the only guy for the ladies, then all the other guys are threats to his domain. It's a challenge that can't be ignored. The boys start scrumming-they circle each other, five or six at a time, prancing, biting, poking, grabbing caruncles and twisting until the blood flows.

That's when I start watching out for my Tom. This year all his sons have done so well that they're bigger than he is. In previous years his boys have deferred to him until just before Thanksgiving when they finally think they can give him a run for his money. By then, I've got the knives sharpened and I'm not averse to removing one capable of damaging Tom if need be. But I'm afraid with such big boys the scrumming will start earlier this year. It'd break Tom's heart to be separated from his flock, but it'd break mine to lose him. I guess he really is the only guy for me.