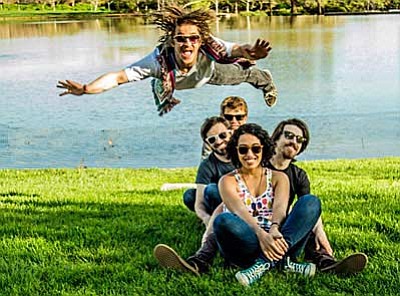 Founded in the Foothills of El Dorado, California, the music of Island of Black and White is a sweet, humble yet raw blend of acoustic rock, funky reggae, and soulful blues. It is a mixture like no other. <br /><br /><!-- 1upcrlf2 -->

Double your fun and beat the hump day blues at Vino Di Sedona on Wednesday April 6 with an early show by Island of Black and White; followed by the always entertaining Trivia Night with NeuroZach and Lounge Lizard D.

Trivia Night will include; questions to challenge your intellect by NeuroZach, tunes by Lounge Lizard D, fun prizes, and bragging rights.

Trivia Night will be starting at 8 p.m. this month to allow Island of Black and White to perform starting at 5:30 p.m.

Founded in the Foothills of El Dorado, California, the music of Island of Black and White is a sweet, humble yet raw blend of acoustic rock, funky reggae, and soulful blues. It is a mixture like no other.

Their high-energy performance is one not to be missed. With over 40 originals, the unique sound of Island of Black and White today captures the attention of those young and old: with Chris Haislet on guitar, keyboard, accordion, melodica, flute and vocals, Nawal Alwareeth on drums and vocals.

It is apparent for anyone watching, that the band shares an immense love for music. Not only does the band enjoy playing, but their incredible performances engage all who listen; and the energy is shared with the entire crowd. www.IslandofBlackandWhite.com

Be transported on a magic carpet ride as Meadowlark performs a vibrant, colorful mix of world-influenced music at Vino Di Sedona on Thursday April 7, 6-9 p.m. With flute, pennywhistles, and guitar, Rick Cyge and Lynn Trombetta meld influences as diverse as Celtic, African, and Mediterranean traditions to create captivating, organic music as distinctive in sound as it is diverse in scope.

"Lynn is one of the most exquisite flautists I've heard. She and Rick together are pure musical heaven." - CPL Sedona Music Director, Shondra Jepperson.

You'll feel like you're in a 1960's beach movie when listening to surf guitar and vocals by Randy J at Vino Di Sedona on Friday April 8.

Born in Orlando, Florida, Randy J moved to Los Angeles in 1987 and shortly thereafter began composing music for film trailers and TV spots. He returned to Orlando and formed his band the Tarantulas in 1995; now a Sedona resident, and known for his 50's and 60's surf guitar sound, Randy performs as a solo artist and with The Tarantulas.

Saturday April 9 features two local favorites Paolo and Alex Ogburn. Paolo's jazz classics accompany afternoon wine tasting, 3:30-6 p.m., his favorite song is always the one he is performing at the time, and he really puts himself fully into his music.

Ogburn takes over for night-time entertainment, 7-10 p.m. Ogburn's music career has taken him from Alabama to Florid to Sedona. In Birmingham, Ogburn began playing in pubs and restaurants at the age of 19. The years in Birmingham contribute to Ogburn's fiery and soulful Southern blues. Ogburn's show will include unique interpretations of a wide range of choice covers, and eclectic originals.

Join Jim French at Vino Di Sedona for his Open Jam every Sunday, 6-9 p.m. Jim always invites top quality musicians; you would never know that they do not regularly perform together. Musicians are welcome to attend and join in, or even play a few songs solo, audience members who want to enjoy the music are welcome too!

KB Bren returns to Vino Di Sedona for another Music Monday on April 11, 6:30-9 p.m. KB is a Sedona resident with a life-long music career. In the 1990's and early 2000's KB played with two well-known bands, Grateful Fred and Cold December. After a hiatus from performing, KB is happy to be back to performing live in Sedona.