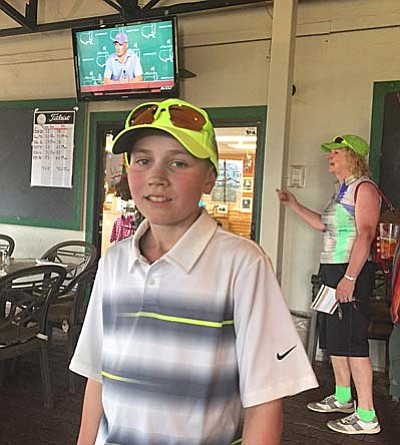 Cooper Neil poses for a photo after shooting a 73 at Verde Santa Fe, and acing hole No. 16. Neil, visiting his grandmother from Snoqualmie, Washington, said he’s been playing golf since the age of one. (Courtesy Photo)

COTTONWOOD- As the Northern Arizona Women's Golf Team began their annual Medallion Tournament at the Verde Santa Fe Golf Course in Cornville, the 14 women competing were joined by 13-year-old Cooper Neil, in town from Snoqualmie, Washington visiting his grandmother.

Donning a Ricky Fowler-esque outfit, with a highlighter colored hat, sunglasses, and matching shirt, Neil went out and impressed his company, shooting a complete round 2-over par 73 that left some of the competitors in awe.

Along with shooting a 2-over par on the 6,038 yards of golf course from the longest tees but the young prodigy also surprised everyone by acing hole No. 16. This wasn't the first time that Neil had aced a hole as the 13-year old aced his first hole back in February of 2015 in Oregon.

Cooper said he has been playing the game of golf since the age of one, 12-years later and plenty of time to improve his game even more, the youngster knows what he wants to do when he grows up. When asked if he intends on playing golf professionally when he grows up, Cooper answered, with no boastfulness just complete assurance, "yes."

The 13-year-old, came dressed to impress and did just that on Tuesday. The President of the Women's league, who is no slouch at golf and currently holds a handicap of 14, said she only out drove the youngster once on all 18 holes.