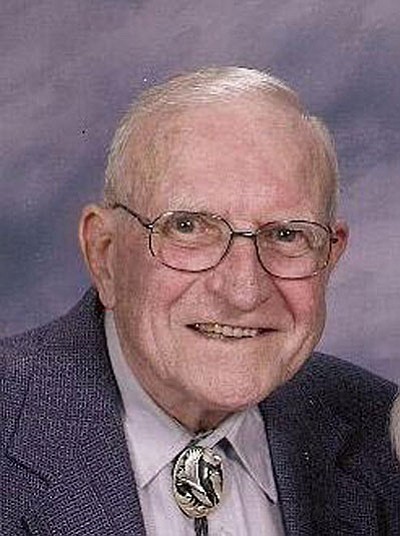 John Osborne Potts, 92 of Cottonwood, passed away on April 6, 2016. He was born on July 30, 1923 in French Lick, Indiana and lived there with his mother and father, John and Hollus Potts and his younger brother, Russell, until 1928 when the family moved to Phoenix, AZ.

He had his schooling in Phoenix, graduating from North Phoenix High School in May 1939.

He entered the Navy in February 1943 and became a Radioman First Class, graduating 46 in his class of 257. He served overseas in Apanama, Gilbert Islands and Kwajalein, Marshall Islands and was honorably discharged in January, 1946.

In November, 1945 he was married to Elizabeth Wells. Following his discharge, they lived in Phoenix until 1950 when they moved to Prescott, AZ.

He was a machinist there until January, 1974 when the family moved to Cottonwood.

John worked at the Salt River Cement Plant in Clarkdale, retiring in 1985. Throughout his lifetime, he was active in his church wherever he was living. Following his retirement, he and Elizabeth traveled through most of the western states.

Contributions can be given in John's name to the Verde Valley Christian School, 102 S Willard St, Cottonwood, AZ 86326.