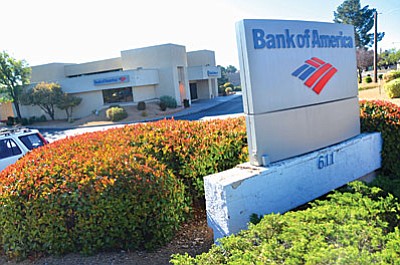 COTTONWOOD -- The reward for information in the January Bank of America burglary case in Cottonwood has been increased to $20,000.

The Cottonwood Police Department is continuing to seek information regarding the break-in.

According to police, the Jan. 27 early morning burglary of the Cottonwood branch of the Bank of America saw about $350,000 stolen.

According to the original news release from Cottonwood Police Dept. Commander Gary Eisenga, the break-in and theft occurred prior to Bank of America opening for business.

"An individual or individuals entered the bank through the rear door of the building. The suspect or suspects removed approximately $350,000 from the bank. It appears that the suspect may have had knowledge of banking procedures to include security procedures. Information has been obtained that a white sedan was seen in the area during the time of the initial alarm call at 1 a.m.," Eisenga's news release stated.

Detective Sgt. Tod Moore said one or two people entered the bank branch overnight through the back door to the building.

There was no forced entry, he said.

Moore said alarms called police to the bank branch twice. The first alarm brought police to the Bank of America branch at 1 a.m. The second alarm was at 4 a.m.

Both times, said Moore, police "found the bank secured and nothing suspicious was observed."

The $20,000 reward has been offered for information leading to the arrest and conviction of the suspect or suspects involved. Yavapai Silent Witness can also be contacted at 1-800-932-3232.

Please contact Detective Sgt. Tod Moore of the Cottonwood Police Department Criminal Investigations Division if you have any information in regard to this incident. He can be reached at (928) 634-4246 or tmoore@cottonwoodaz.gov.