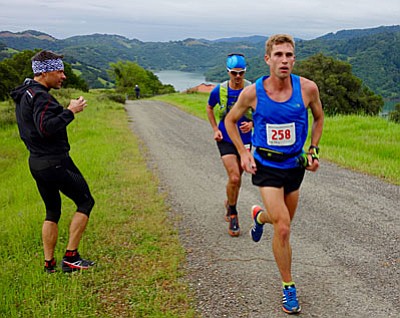 Freriks, a 2009 Mingus graduate, covered the 50-mile course in 6-hours, 17-minutes and 58 seconds in the rainy and cool conditions of the hills of California's Lake Sonoma. He came in behind training partner Jim Walmsley of Flagstaff, who covered the distance in 6 hours, 52 seconds.

A newcomer to ultra-trail racing, Freriks' second-place finish came as a surprise to some observers; irunfar.com Senior Editor Meghan Hicks wrote "Who's he? A standout high school and collegiate track and cross-country runner and a friend of Jim's who decided to give ultra-running a go. It was hard not to be intrigued by the story of a guy running boldly in what I was sure was his first ultra. And, it's hard not to be intrigued by the fact that he ran 50 miles just fine -- in fact, better than fine -- took second, and earned a Western States 100 Golden Ticket."

Freriks was a first-team All Big Sky Conference performer for the Northern Arizona University cross country team and also competed in the 2010 NCAA national championship race for the Lumberjack cross country squad.

While attending Mingus Union High School, Freriks ran 3,200 meters in 8-minutes, 58.71-seconds. He is the 10th fastest prep runner at the distance in Arizona history and one of only 14 Arizona high school runners to ever break the 9-minute barrier.