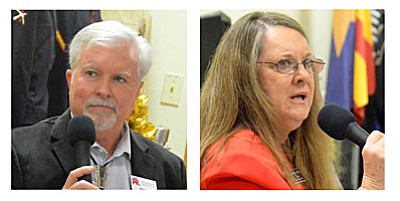 The Mingus Mountain Republicans presented what they billed as a "debate." There were no questions from the crowd, but moderator Bob McDonald asked 10 questions that had been proposed by current Verde Supervisors Chip Davis and Tom Thurman. Each candidate was given two minutes to answer

What is the job description of a county supervisor?

Diane Joens: Budget is one of the biggest issues. They manage funds of officers even those that are elected. They also govern planning and zoning issues and capital projects. The biggest project right now is now the Prescott Jail. They also help with citizens requests.

Randy Garrison: I would like to think that at the end of the day the job is to run the business of the county. They are responsible for your tax rate. They are responsible for spending your money. It's a business. We provide roads, services and safety. You pay taxes and we will manage that for you. What I would like to think is the bigger part of the picture, we are the bridge between the community, your county and state and federal governments. We learn what your needs are, concerns are, then we find out what needs to be done and go out and partner with the state or federal government to get the funds and services. That, I think is the most important part is to learn your community well and be a great representative for you.

Should we raise property taxes for a new jail, go back to the voters for a sales tax increase, or wait until the jail becomes overcrowded and forces the county to build another jail?

Garrison: First, I will never be in favor of raising property taxes. You have to realize that many of the people that are there are mentally challenged - they say it is about 60 percent. Our jails are doing the wrong thing. They are not built to be social housing, it was set up to be incarceration. We need to deal with changing the people we are putting in and providing services for the people that shouldn't be in there.

I think there are ways we can offset or get rid of incarceration. Cottonwood has taken on a program of putting tracking bracelets on people and sending them home for petty offenses. They sit in their house and pay the city to do that instead of the county or city paying for them to be in jail.

Our facilities are under-staffed or stressed. The one in Prescott is unsafe and needs to be corrected. So we have to pay money to deal with the system we have now. I would be in favor of going to the public and asking them to increase the 1/4 percent tax that we now have, to ½ percent and use that money to provide a new jail for the Prescott area.

Joens: We have had two elections on the question, one in 2008 failed and one in 2014 also failed. So I think the public is saying 'no more taxes'. Having worked for the county supervisor in the late '90s and early 2000, when the federal government did come down and require the county do something about the jail problems, I have seen that it's not pretty. We need $40 million to build a 144-bed facility and a sally port facility. I would go to the voters and explain what a reduction in services means. Does that mean no regional roads? Does that mean less health care that the county provides for them. And then we have to let them know they have to choose one or the other. Remember, in 2020, the current ¼ cent jail tax expires, so we only have four years.

Do you believe the Big Chino Water pipeline will impact the Verde Valley and if so, what should the county do about it?

Joens: The Prescott community has the right to pump 8063 acre feet of water from the Big Chino and that sub-basin has the capacity of 15 million acre feet. There is about 300,000 acres of land in the Big Chino that is private. State Trust lands equal another 220,000 acres. The county used to have a committee called the Water Advisory Committee that has done a lot of studies. The Prescott Community has the right to take out the water, but I don't believe that will impact as greatly as development there would be, that would take a lot more water. Even though the Big Chino only provides about 3 percent of the total flow of the river, it could dry up the river from Paulden to Clarkdale. SRP, which has rights to the surface water, has been working with the Prescott communities and doing significant monitoring. But if you don't want the Big Chino developed, you have to buy that land, you have to write a check.

Garrison: Yes it does, it will affect the Verde Valley. The question is by how much? Prescott has the right to pump the Big Chino and send it in to Prescott and Prescott Valley. The big problem, would be development on that land. If we continue to allow that area to increase at a high density rate instead of remaining rural as it is now or getting it out of the development process all together, we are not only going to see an impact, we are going to see dry stretches, especially the upper stretches. I don't know how many of you have fished a dry stream, but it's not real fair. It's a big regional problem, It's has to come from not just one side of the mountain, it has to come from this side also. We need to bring everyone together. There are as many water groups as stars in the sky. We need to come together and preserve our water, because that stream is a means of life for the Verde Valley.

Garrison: One way is to go out and become absolutely embedded in your community; find out what the concerns are economically and socially and try to come together and fix those problems. The other is to stay vigilant to understand what all the challenges and needs of the community of other districts of the county, because those are who you are competing for funding and if you don't understand the whole picture, you don't understand how your projects fit into that budget. To serve you is to serve the county so you get the respect you need for the project you want over hear.

Joens: I recall when I worked for the Supervisor Davis in 1998, when Supervisor Carol Springer and Representative Sue Lynch introduced a bill to establish a water district, with the authority to levy taxes for wells and to build a pipeline to bring and allotment of water from the Big Chino into the Prescott AMA. And it was really a scrapper. And the fight began. And for 20 years, he has been working hard to make sure the Verde Valley receives its fair share and he has done a fantastic job. I think once the Board of supervisors became five instead of three, I did see a real willingness to work together. A lot of the actions of a board of supervisors, depends upon the personalities of its members. You can have an election as Cottonwood did a couple years ago that really throws a monkey wrench into your progress and the way you were able to get things done. I don't know that there will be a fight, but if there is, you want to keep requests going for the people of the Verde Valley. I think the Stewards of Public Lands, the SciTech festival -- which I founded -- the Verde Front organization and the cooperation between Cottonwood and Camp Verde on Highway 260 shows what collaboration can do.