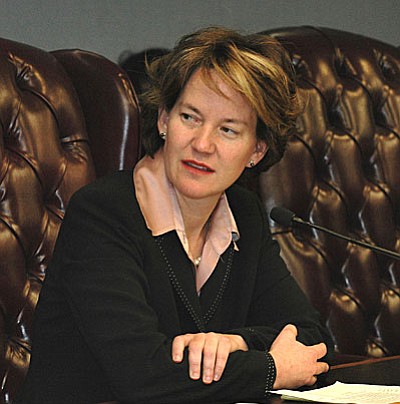 PHOENIX -- Saying electric companies appear to be trying to kill solar, a former state utility regulator is proposing a constitutional amendment to stop them from doing that.

The initiative measure filed Friday by Kris Mayes would block regulated utilities like Arizona Public Service, Tucson Electric Power, UniSource Energy Services and a host of cooperatives from imposing "demand charges' on customers who generate their own power.

It also would preclude efforts to let utilities reduce the amount they credit customers who generate more energy than they use. Instead, companies would effectively "pay' customers the same charge per kilowatt hour as they would bill the customers.

Utility officials have insisted the changes are necessary to prevent customers without solar from effectively underwriting the cost of the network on which solar customers still depend.

But Mayes said studies have show "that's a bunch of hooey.' And she said what utilities are trying to do is make solar, which effectively competes with utility-owned power plants, unaffordable.

"The policies that they are promoting would have the effect of seriously undermining the ability of Arizonans to go solar,' she said.

Her measure, if approved by voters in November, also is designed to prevent what Mayes said has been utilities "dragging their feet' in approving connections between customer-owned solar and the network. It requires companies to act within 45 days of a request or be prepared to justify to the Arizona Corporation Commission why it cannot comply.

Mayes knows something of what she speaks: As a member of the commission a decade ago, she introduced the concept of "distributed generation' to the state. The idea was to promote having residents and businesses produce their own power as an alternative to the electricity now largely generated through nuclear, coal and natural gas.

She also was the driving force behind the requirement for utilities to produce at least 15 percent of their energy from alternative sources by 2025, including solar and, in particular, distributed generation.

Since that time the solar industry has flourished in Arizona -- and not always at the pleasure of utilities.

In the first case on the issue, the current commission is hearing arguments by UniSource to impose demand charges on its more than 90,000 customers in Mohave and Santa Cruz counties.

That would base power bills on each customer's highest usage level during a billing period. By contrast, most residential customers now pay a bill based on a fixed monthly cost plus rates based on the amount of electricity used.

The difference could be significant, particularly for solar customers, who have low overall needs but may have a high peak demand at certain times of the day.

On top of that, UniSource wants to reduce its "net metering' rate, what it credits customers with rooftop solar for the excess power they produce. Now customers get a credit equal to what they would otherwise pay at retail; the change would let the utility lower that to its wholesale costs.

TEP, which is owned by the same company as UniSource, and APS are both weighing similar changes -- and are waiting to see if the commission goes along with the utility's plan.

If Mayes gets her measure on the November ballot and voters approve, the commission would be powerless to approve any such plan, at least through 2022.

Joseph Barrios, spokesman for UNS, the parent company of both TEP and UniSource, said his company has not had the chance to study the initiative. But he made it clear UNS does not want its bid before the commission to change the rate structure for solar short-circuited by the measure.

"There's been a great deal of participation by several parties and members of the public throughout the proceedings before the commission and we're in favor of allowing those issues to be addressed in current proceedings,' he said.

There was no immediate response from APS.

Mayes conceded she has an uphill fight: She needs to gather 225,963 valid signatures on petitions by July 7 to put the measure before voters.

But Mayes hinted that she will have the resources needed to hire paid circulators to meet the deadline.

She declined to give specifics on Friday, saying her campaign committee, formally known as Yes on AZ Solar, will file its first financial disclosure form this coming Tuesday.

"That will demonstrate that the resources that are needed for this fight will be there,' she said. "We're going to make sure we do everything we can to make sure that Arizonans have the right to decide this issue for themselves.'

That still leaves the question of why utilities are trying to change the rules.

In general, the contention has been that non-solar customers are effectively subsidizing those who can afford to buy or lease solar panels to generate their own electricity.

Companies contend there are certain fixed costs for everything from operating power plants to maintaining the delivery system. And the less paid by solar customers, they argue, means more picked up by others.

"We've presented a significant amount of evidence addressing the shortcomings of the current net metering plans and how proposed changes would be more equitable for all customers while fairly compensating users of solar power systems,' Barrios said of the UNS request.

"The argument that APS and other utilities make that there is a cross subsidy ... is mythology,' she said. "It has been completely debunked by all the evidence presented in the cases that are currently going on before the corporation commission.'

Mayes argued that solar -- and distributed generation in particular -- actually can save money for all customers.

"That is because distributed generation reduces the need to build additional utility-scale power plants,' she said, which are very expensive.

"There are utilities that don't like the competition that comes from consumers going solar,' she said. "And I think there are some utilities that feel threatened by it.'

A spokeswoman for the commission which is considering the UniSource request and would have to rule on the others said Chairman Doug Little has not had a chance to review the initiative and had no immediate comment.

Customers of Salt River Project, which already has imposed changes, would be unaffected by the proposal. That is because the initiative amends only the section of the Arizona Constitution which governs commission-regulated utilities. SRP is set up as an irrigation district with its own governing powers, not subject to ACC regulation.