Third-grader becomes dispatcher for a day for Cottonwood Police 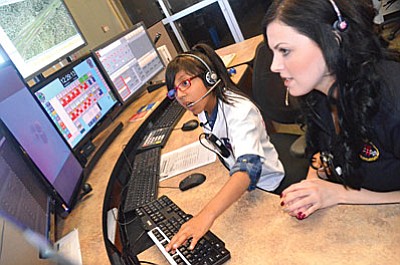 Jessica Casa and Communications Specialist and trainer Chelsea Shephard work the dispatcher’s console at the Regional Communication Center in Cottonwood on Friday. Casa just reported that the Grinch is on the loose. VVN/Vyto Starinskas

COTTONWOOD -- It may have been the Grinch robbing a Cottonwood store, but 9-year-old Jessica Casa still dispatched Cottonwood Police officers with a clear and confident voice.

The third-grade student from the Cottonwood Elementary school was at the police dispatchers' microphone at the Regional Communication Center dispatch room Friday experience learning what it was like to be a police and fire dispatcher.

However, she was talking on Channel 2, a channel used for training. The calls the student was making to police officers in their cruisers were not real, but officers did talk back with the girl.

It all began when Casa wrote a letter to the Cottonwood Police Department during a class project in teacher Naya Persaud's class at Cottonwood Elementary School.

"If there is a dispatcher position open, I want to apply. How old do I have to be to work there? Thank you for your time," she wrote to the Cottonwood police.

"She sounded good the radio," explained Cottonwood Police Department Sgt. Monica Kuhlt, who said she was really impressed by the girl after she received her letter and set up the dispatcher experience for her.

Casa worked for more than an hour and a half with Communications Specialist and trainee Chelsea Shepard, sitting at the dispatcher's console where they dispatched calls, talked to officers and looked at the computer screens for information.

Training for dispatchers in the Regional Communications Center takes about four to six months and the training is done on-site, explained Marie Carpenter, Communications Manager.

Casa said after her experience, she would like to be a police dispatcher someday.

The student said she wrote to the police because they protect her town and she wanted to be part of protecting people and saving the world.

Collision leads to drug charges
Crime: Breaking up is hard to do
Too much beer and too many holes in walls
Woman arrested for alleged theft of $1,784 in baby formula
Police receive false alarm about gunman at local charter school
Event Calendar