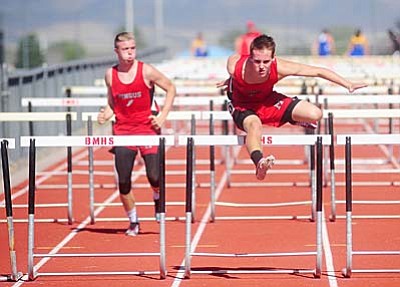 The senior vaulted a height of 13 feet and 7 inches, two feet higher than any other competitor at the meet. His vault was also the fifth highest vault in Division III in 2016.

The Prescott boys and Sedona Red Rock girls came out on top in the meet with scores of 184 and 169 but the Marauders turned in solid performances across the board as the Arizona Interscholastic Association Division III State Meet is just a little over a week away.

Megan Goettl turned in another solid performance, after signing her Letter of Intent to run for the University of Arizona next year. The U of A commit took first place in both the 400 meter and 800 meter races with times of 1:02.88 and 2:28.50.

Goettl was followed up by teammates, Hannah Devore, Meg Babcock and Holly Johnson. Devore and Johnson both earned top five finishes in the 100 meter dash with times of 13.46 and 13.54 seconds.

Devore, a sophomore, took second place in the 100 meter hurdles as well with a time of 17.20, just .04 seconds behind Chenoa Crans of Sedona Red Rock. She continued to impress throughout the meet and also took home fifth place honors in the 300 meter hurdles with a clocking of 53.09. Devore holds the third best time in the event in Division III with a clocking of 48.31.

Johnson, a junior, excelled elsewhere in the meet as well, earning a second place finish in the 200 meter dash with a time of 27.89. Johnson and Devore also teamed up with Katelyn Prouty and Mackenna Jung in the 4 x 100 meter relay and earned a first place finish with a clocking of 52.34.

The 1600 meter race was a battle of freshman, as Babcock and Anna Zea of Bradshaw Mountain earned the top two spots in the event Friday afternoon.

Babcock crossed the finish line first with a time of 5:57.51, Zea came across the line about five seconds later with a clocking of 6:02.60. Annie Parella, a senior from Sedona Red Rock, took third in the event with a time of 6:13.25.

On the boys' side for Mingus, it was Gribauskas who set the bar high and out of reach from the rest of the field, taking home the Pole Vault event by two feet.

In other field events, junior Trevor Galloway brought home a 2nd place finish in the shotput with a throw of 43 feet and a half inch. He also took home third in the discus event with a toss of 121 feet and 7 inches.

Senior Alec Phyfer and freshman Nick Lodico earned sixth and seventh place finishes in the 110 meter hurdles with times of 19.46 and 20.31.

Finally, Sean Williams ousted teammate Jordan Prouty by .04 seconds in the 100 meter dash to claim sixth place honors in the event. Williams posted his fastest time of the season, and his career, with a clocking of 12 seconds flat.

The Marauders get one more shot to improve their times and qualify for the AIA Division III State Meet on Wednesday, April 27, at the Alhambra Last Chance Meet.

In order to compete in the meet, the athletes must have at least provisionally qualified for their event.

The provisional qualifiers for the Marauders so far this season include, Ryan Alexander in the 800 meter, Joseph Sandoval in the 800 meter, 1600 meter, and 3200 meter races, Stefano Dalu and Trevor Galloway in the shotput, and Evan Snyder in the High Jump. The boys also qualified their 4 x 800 meter relay team of Sandoval, Alexander, Dallin Gordon, and Cristian Lazaro.

Automatic State Meet qualifiers for the Marauders include Trevor Galloway in the discus, Chance Gribauskas in the pole vault, Megan Goettl in the 800 and 1600 meter races and last but not least Hannah Devore in the 300 meter hurdles.