Mini RV Boondock towns are sprouting up throughout Verde Valley 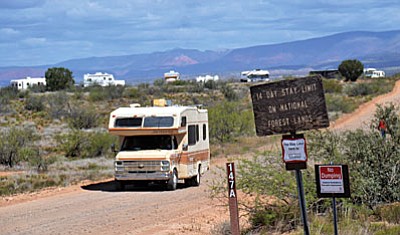 Boondockers are campers who park their RVs in remote areas without benefit of utility hook-ups or fees. What they gain are peaceful surroundings and diverse company. (Photo by Vyto Starinskas)

You've seen them parked in circles like current-day wagon trains. Increasing numbers of RV dwellers have taken to the boondocks to live a life unfettered by crowds, electricity and - - for a few - - the law.

"It's a mixed bag," said one long-term RVer who has made this lifestyle a choice after being thrust into it by circumstance. Declining to identify himself, "Mr. G" has a clean truck and travel trailer that would be welcome in any upscale RV park. His current campsite is the Bignotti River Access road off SR 260.

"The economy slapped us down in 2008. People lost everything. If they had anything left, they'd take pocket change to buy a trailer or motorhome," he said.

"It's a simple life. I don't have to worry about coming up with rent," he said.

Meanwhile, a retired gentleman in polo shirt and baseball cap walks by, exploring the many paths winding through mountain vistas in the near-silence of the high-desert.

John Crawford is a visitor from Kentucky who parked his rig just feet away from busy SR 260.

"I travel state to state. I use these because most the time it's less crowded," he said. "I may only stay a short while, so I just pulled off the road."

Joining Crawford's impromptu "Boon" town is Ron Lewy. He fits neither of the two scenarios above.

"I came here from Cottonwood to get a few days away from it all," he said. This is Lewy's first foray into the RV lifestyle and he "heard you could camp here for free."

While he enjoys his time camping here, it is not likely a long-term lifestyle for him, unlike others who declined to be interviewed.

Why are they here?

Whether by choice or circumstance, mini RV Boondock towns are sprouting throughout the Verde Valley for a variety of reasons. Availability of boondock sites, mild climate, recreational opportunities and proximity to a highways and towns are just a few of the reasons given by these unconventional campers.

The Recreational Vehicle Industry Association reports "RV shipments are the highest in nine years." The owners of two proposed RV parks still in the planning stages have said in council meetings that their "phones are ringing off the hook for people wanting reservations."

"In March and April is peak season. There's not a lot of spaces available," he said.

In fact, some of the boondockers off SR 260 are his own customers, complying with a regulation requiring 28 days out in a year to be considered campers and not residents.

"It's worse this year. I've been here a decade and it's not been to this extent until now," said Woolley. "A number of homeless are ending up on ranch land and driving the ranchers crazy."

Woolley says the only downside to the "Boon" town outside his business is what he says are "law enforcement action there."

Dwight D'Evelyn, media relations coordinator with the Yavapai County Sheriff says, "The bulk of this area belongs to the City of Cottonwood. The patrol commander is aware of the situation and indicates our calls in surrounding county areas are rare."

Where can they camp?

It doesn't take long to find "Boon" towns in the Verde Valley. Drive by Thousand Trails Road while on SR 260 near Camp Verde or peek at Forest Road 525 off SR 89A near West Sedona and you will see rings of campers.

What that means is that a person may setup camp free of charge within the designated boundaries of that area. You get what you pay for. Unlike conventional campgrounds, these sites offer ground to camp on and little else - - no water, no electricity, no dump stations.

They also include a list of rules which may or may not be consistently enforced due to a shortage of law enforcement personnel. (Please note, the following are general guidelines. Consult the managing agency to learn specifics and exceptions and refer to agency provided maps to verify lawful dispersed camping sites).

According to both forest agencies website, Designated Dispersed Camping areas have a 14-day stay limit within 30 days.

Some areas near Prescott are even shorter, with a 7-day limit within 30 days. Also, campers may not lawfully camp within one mile of a designated campground or closer than one-quarter mile from a water source (such as a tank or river).

Teresa Chase, National Forest supervisor, writes in a Sept. 14, 2015 memo that the restrictions were necessary to "distinguish between recreational and residential use."

But the campers we spoke with relate stories that illustrate these rules are not necessarily obeyed.

"You've got such a mix of people here. Some people move, some people stay. You get some dangerous people. I understand the forest service has got a job to do," said "Mr. G" who himself has been ticketed. But he also "spent three hours picking-up trash around here" and does "volunteer to feed the homeless."

Assistant Recreation Staff Officer Dan Ritter of the National Forest Service is well-aware of the conversion of campers to residents.

"This is not just an Arizona issue. It's becoming more of an issue nationwide and ongoing it will continue to become an even bigger issue," said Ritter

Editorial: Ban on boondocking is no guarantee problem will go away
Live like a GIANT in a tiny house
Editorial: SR 260 camping ban has just moved problem down the road
Out of Africa to expand with SR 260 improvements
Verde Ranch ‘on track’ for Aug. 1 opening
Event Calendar