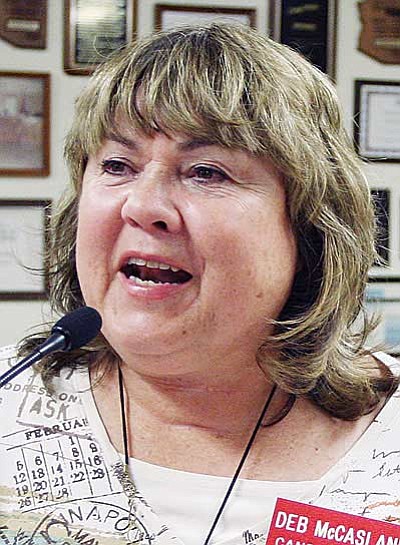 VERDE VALLEY - One of the five Yavapai College District Governing Board members has voiced support for Bob Oliphant's new book, "Wake Up Verde Valley You've Just Been Ripped Off."

The 310-page book is an exhaustive treatise that claims Yavapai College historically has taken in considerably more tax dollars from the Verde Valley than has been returned to our communities in services.

According to District 2 Governing Board Member Deb McCasland, Oliphant has hit the nail squarely on the head.

McCasland said the Capital Improvement Master Plan was approved by the YCC Board in 2012, before she was elected to the board.

"There were a variety of factors that influenced me to run for the YCC Board," said McCasland. "The way DGB member Bob Oliphant was treated by the Board and Administration and the CIMP.  I couldn't understand why the college was going to sell facilities that were being paid for by the bond of 2000 and spend over $100 million of taxpayer dollars on building new facilities without a vote of the public.  And finally, I could not understand why the Board totally disregarded the public input and rubber-stamped every expenditure and issue submitted to them.

"We have been told that the CIMP is a living document that will be adjusted as situations dictate.  In my opinion, this is the time to for the Board to provide equity and access for the Verde Valley. The proposed $9 million soccer complex (multi-use field, event center and parking lot) and the $4.5 million lecture hall should be scrapped and this $13.5 million used to support accessible educational opportunities in the Verde Valley and other rural areas of Yavapai County."

McCasland is also critical of the college's investment in athletics, saying, "Out of 104 student athletes only four reside in Yavapai County. With the average cost to taxpayers of educating a student at $11,000, this is an $110,000 annual bill. Plus the cost of running the sports programs at close to $1 million. This was the cost when I worked at YC. With the elimination of men's and women's basketball it might be a little lower. The total does not include the scholarships that are only for athletes. Are our taxpayers getting their money's worth?"

McCasland was the only member of the college board or administration to respond to inquiries from The Verde Independent concerning Oliphant's book.

Verde Valley Board Advisory Committee Member Bill Regner also responded. Regner said he had not yet read Oliphant's book and the questions asked by the Independent "are questions that should be asked by your newspaper of the college administration."

Also, College spokesman Kim Kapin said, "Mr. Oliphant's book has been received by the college library.  It will be submitted for review under YC's material selection policy. The process will take approximately two weeks."

That policy, in part, states: "The selection of library resources on controversial issues shall be directed towards maintaining a diverse collection representing various views ... It is the responsibility of the library's professional staff to ensure that all points of view relevant to the College mission are represented in the collection."