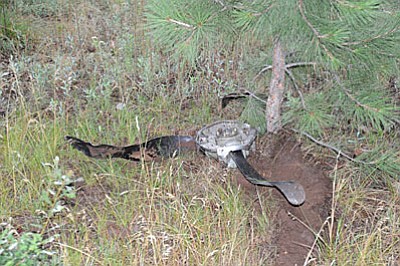 The Twin Engine Piper Seneca crashed about 5 miles southwest of the airport and about 50 yards east of State Route 89A. (Photos courtesy of Coconino County Sheriff's Office)

FLAGSTAFF -- At least one fatality has been confirmed in an aircraft crash just south of Forest Highlands, just above Oak Creek Canyon.

Around 9:24 p.m. Tuesday, the Flagstaff- Coconino 911 Center received reports from several citizens in the Forest Highlands and Kachina Village areas of a loud crash, possibly a downed aircraft.

Coconino County Sheriff's Office deputies and Arizona Department of Public Safety officers responded to an area on SR89A and noticed the odor of fuel. They located the crash site near the highway. Highlands Fire Department and DPS Air Rescue also assisted in this response.

The Twin Engine Piper Seneca crashed about 5 miles southwest of the airport and about 50 yards east of State Route 89A.

There were no reports or indications of a fire.

The debris field of the crash is more than 200 yards long; tops of trees broken off show the impact path.