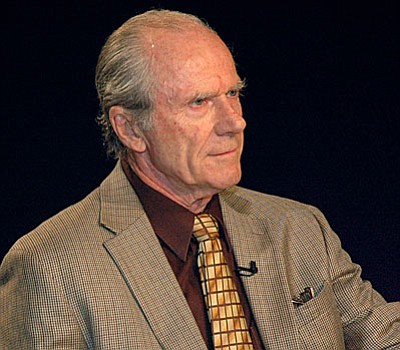 PHOENIX -- Saying the rate-setting process is being subject to improper influences, a state utility regulator has hired an outside attorney, at public expenses, to look into the issue.

Bob Burns said Tuesday he wants to find out if the current procedures for determining what utilities can charge their captive customers is subject to "undue influence' that can leave the ratepayers at a disadvantage. And while the scope of what the attorney is being asked to review is broad, it specifically includes the question of whether money spent by utilities to elect members of the Arizona Corporation Commission affects the outcome of rate cases.

The study will be financed with commission funds, with attorney Scott Hempling allowed to charge $315 an hour with a cap of $95,000. Those dollars come from a regular assessment on all commission-regulated utilities.

Burns said he is entitled as an individual commissioner to hire outside counsel even without the consent of the other four regulators. All have been antagonistic to his idea of forcing utilities to disclose what they are spending on commission races.

He denied that the contract, announced less than a month before the Aug. 30 primary in which he is fighting to retain his seat, is in any way political. Burns pointed out he has been harping on the issue of greater disclosure for months.

Anyway, he said, the inquiry would not have been necessary had Arizona Public Service, the state's largest electric utility, stayed out of the 2014 race. The company will neither confirm nor deny that it provided any of the more than $3 million spent that year by outside groups to help elect Republicans Tom Forese and Doug Little.

But Little, who chairs the panel, said he found the timing curious.

"Early ballots (for the primary) go out on Wednesday,' he said. "If I were a candidate and didn't have a whole lot of money and I couldn't do a mailer, how else would I get attention?'

At the heart of the issue has been the contention by Burns that APS has effectively been trying to pack the panel with commissioners that will view its rate hike requests favorably.

Neither APS nor its parent company, Pinnacle West Capital Corp., can donate directly to candidates. But they are free to give to so-called "independent expenditure committees' which can run their own campaigns promoting favored candidates and knocking their foes.

Two of those committees, Save Our Future Now and the Free Enterprise Club, spent more than $3 million on behalf of Forese and Little in 2014. But their organizers have refused to disclose the sources of their cash, saying they are legally exempt.

No one has suggested that either Little or Forese is aware of any APS involvement in their election. But Burns said that still leaves a lot of questions.

"The bottom line is, is there undue influence on the commission to the point of creating an unfair advantage with the utility or the ratepayer,' he said. "Our job is to protect the ratepayer.'

Burns said that even a small tilting in favor of a utility can have a massive impact.

The commission gets to set the rates because utilities are a monopoly: Every customer within that service area has to buy electricity, gas, phone service, water or sewer service from the utility that has been granted permission to serve it.

Commissioners are supposed to look at a variety of factors in determining what are the proper rates. And a big portion of that is what is considered a fair rate of return.

What is fair, however, is up to regulators.

Burns said that in the last rate case involving APS, just a 1 percent difference in that rate of return translates out to $60 million in revenues for the company -- and $60 million more taken from customers.

"Get a friendly commission, get a half a percent, that's $30 million,' he said. "It makes the $3.2 million (spent by outside groups which won't disclose their sources) worthwhile.'

Burns cannot legally block APS from influencing commission races. But he hopes the report, due in December, might pressure colleagues to demand that APS publicly disclose what it and Pinnacle West are spending, a move that might put a damper on future donations.

Attorney General Mark Brnovich said Burns can individually demand APS disclose its political spending. But Brnovich, in a formal legal opinion, said it would take a vote of the full commission to force Pinnacle West, which may be the source of any funds, to open up its books. And there is little sentiment among other commissioners to do that.

"What Pinnacle Wet Capital does with its lawfully earned profits is its own business,' Little said.

Little said in the 18 months he has been on the commission he has made all his decisions based solely on the record. And he dismissed the contention that regulators are doing the bidding of APS.

"There have only probably been a handful of major decisions involving APS since I took office,' Little said. "And in the vast majority of those major decisions, we didn't give them what they wanted.'

That includes the commission allowing APS to impose only a $5 a month surcharge on customers who generate their own power; the utility at one time had asked for far more.

Little did find one area of agreement with Burns: He said Hempling is "an icon in the industry' and has "a very good reputation for being very fair and balanced.'