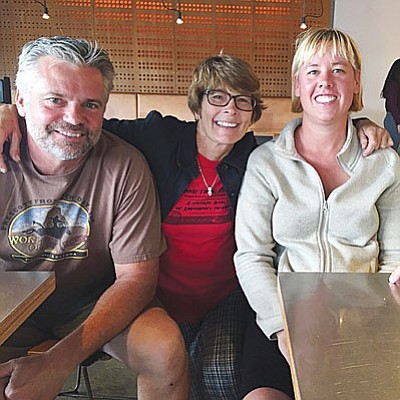 Clarkdale Town Council was considering adopting Town Ordinance 8-8-1 defining and regulating mobile food vendors. The ordinance was drafted after the owners of two local businesses inquired about expanding to a mobile platform but the town had no provisions to do so.

"Not try to re-invent the wheel"

Chandler, along with fellow coalition member and food truck owner Dan Thomas, spoke during Public Comment to suggest that the town "not try to re-invent the wheel, but rather use what's already been done, the County code."

"I hope you will find my input valuable and will foster local small businesses and not drive them (away) to other states. We all want to work in the community but with the red tape (in other communities) we find it difficult to run a business," said Chandler.

The two briefed council on the obstacles they say food truck owners face when trying to do business in Yavapai County. They said the three keys to encouraging entrepreneurship were "unification, simplification and elimination."

"Each community requires compliance with governing zoning, fire, health, noise, sign, lighting and parking regulations yet information is not readily available or found. City personnel are clueless when called and we are often redirected to several departments," Chandler said.

"I had a construction site wanting to pay $1,000 for me to cater 100 lunches, (but) zoning and City required the construction site to fill out a bunch of paperwork. The company ended up backing-out," said Chandler.

Maricopa County has long had provisions for mobile food operations in cities such as Chandler and Phoenix, while other communities such as Glendale and Scottsdale banned the practice until recent years. According to Mobile Cuisine, the food truck business is a $1.2 billion industry that has grown 12.4 percent in the past five years.

As council members asked questions and discussed their thoughts, the path to consensus drifted into divergent directions. The dilemma was how to encourage entrepreneurship and tourism (along with associated revenue) while still protecting the unique character of the community and the best interests of its residents.

Council member Scott Buckley weighed-in with his experience as owner of the Boat House Bar and Grill.

"Food service is a difficult business, whether food truck or store front. I have a restaurant. I feel your heartache. You work so hard for so little," said Buckley. "At same time, we have to have regulations. I kind of like the idea of using the County's code and make it easier on everybody."

"We want Clarkdale to be known as being food truck friendly"

Beth Escobar, Senior Planner addressed some concerns about public and private parking and noise from music and generators. She stated that existing ordinances already address most of these issues - - "whatever the business" - - and that others are included in the new ordinance.

Escobar spoke to Chandler's concerns about the mobile food vendor ordinance's parking restrictions, including no overnight parking unless done through a Special Event Permit or in conjunction with a Town event, as well as no parking on private property if adjacent to residential use.

"Food trucks do not have to go through design review and site planning and that places them at an advantage over other properties. They are not connected to utilities, not paying property tax, so that use should be temporary," she said.

At the conclusion of the discussion - - which involved the mayor, council, staff and members of the general public - - the consensus was to defer a vote on the proposed ordinance until staff could gather more information. A possible revision to the proposed mobile food vendor ordinance may be in the making (for example, adding the term "cart").

"We want Clarkdale to be known as being food truck friendly," concluded Town Manager Gayle Mabery.

While owning a food truck may sound like a dream job, Carol Chandler shared her nightmare of start-up costs and requirements:

Suppressant system - $3,000 (my trailer is exempt, most other trucks/trailers require)

Storage rental (if overnight parking and home storage is prohibited) - $50

Elapsed time from application to open for business: