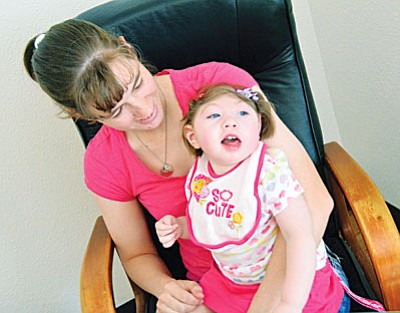 When Breanna Moore of Camp Verde hired a photographer take a picture of her infant daughter Kyrsten, she thought it was going be her last. Now three and-one-half years old, Moore says her daughter has gone from “six, eight, up to 12 seizures a day” to “only having one or two” by transitioning to a legal cannabis extract called CBD. (Photo by Vyto Starinskas)

VERDE VALLEY - When Breanna Moore of Camp Verde hired Perfect Chance Photography to capture an image of her infant daughter Kyrsten, she thought it was going be her last.

Kyrsten was struggling with encephaly and was not expected to survive - - until owner Chance Pedersen mentioned her husband Ian Pedersen's involvement in CBD therapy.

CBD (cannabidiol) is an extract derived from the many species cannabis plant. In this case, it comes from hemp, the legal relative of marijuana that is used industrially in making clothing and rope. Unlike the "high" produced by tetrahydrocannabinol (THC) in marijuana, the effects of CBD are not psychotropic, but rather medicinal. In fact, the substance gained national attention in a 2013 CNN documentary entitled "Weed,' in which a CBD product called "Charlotte's Web" appeared to ease seizure episodes in a nine-year old child.

"High THC has been 85 percent of the (medical marijuana) market nationally with non-psychotropic hemp (CBD) 15 percent. We'll reverse that in the next three to five years," said Ian Pedersen, owner and chairman of Source CBD LLC and CannaBusiness Development LLC

After Kyrsten's birth, Moore found herself entering a world of non-stop care-giving and endless rounds of medication.

"She had encephaly (an abnormality of the skull) and was given a very poor life expectancy," said Moore. "She started having seizures when she was six months of age. She was on prescribed drugs, a lot of trial-basis stuff, very high doses of phenobarbital and other seizure drugs, so she was basically maxed-out."

Moore decided to try something more natural and applied for a medical marijuana treatment card for her daughter. She found the process was "tough and expensive," and while "it helped as far as comfort goes," she was still not seeing the results she had hoped for.

"I found out he (Ian Pedersen, the husband of her photographer) was doing something related to Charlotte's Web. So I asked him if there was something he could do to possibly help."

Pedersen recommended one of his high-CBD, low-THC products infused in organic coconut oil.

"As we started CBD, we noticed immediate results," said Moore. "The seizures became less aggressive and less severe. She was having six, eight, up to 12 seizures a day and now she is only having one or two a seizures a day."

According to Pedersen, CBD products containing less than 0.30 THC can be sold legally and without a prescription (as it is at the Mount Hope Foods store in Cottonwood).

"We are doing statistical analysis and research with non-psychotropic industrial hemp derived CBD. After we identified an infusing process that increased the bioavailability of CBD, we see it lower blood sugar in diabetes and treat symptoms related to fibromyalgia, arthritis, post-traumatic stress disorder and Parkinson's," said Pedersen.

Pederson has been a pioneer in the state's fledgling cannabis industry, having worked as both an industry consultant as well as an entrepreneur. He paved the way in Cottonwood for such businesses as his iGro Hydroponics on 280 S. Main St. and his new CBD products showroom in the La Terraza plaza at 703. S. Main St.

And if Pedersen's application is one of the 33 drawn from the 750 applicants, he is planning to open the largest cannabis facility in Arizona at an as-yet undisclosed location in Yavapai County.

Along with the growing interest in its medicinal value, the cannabis industry is seeing ancillary industries on the horizon.

"Industrial hemp is going to replace plastics and other petro-based products, which is exciting, because the other side is product development." Pedersen said.

"You'll probably see a boom in the industry in local construction and development. We have identified Arizona as one of the next meccas of production. We have 13 hours of sunlight," Pedersen said.

"The Verde Valley's future is cannabis. It's parallel to the climate needed in wine country," he said.

"As we move towards recreational cannabis, we expect many changes in the local economies, including the impending cannabis tourism," Pedersen said.

"We are scheduling an exclusive cannabis infused tasting dinner for medical marijuana card holders to be co-hosted by local and celebrity chefs. This is a great segway into the topic of Canna Tourism and how it will possibly impact this area, as we have over 4 million a year coming through," said Pedersen.

As for Moore, it's how cannabis has affected just one person in her life that has made all the difference. She says Kyrsten's health has improved beyond what traditional medical science could offer her and that she is healthier herself, taking a break now-and-then from non-stop care giving

"It was life-changing," she said. "People should consider this. I wouldn't recommend anything that I wouldn't do for my own daughter."