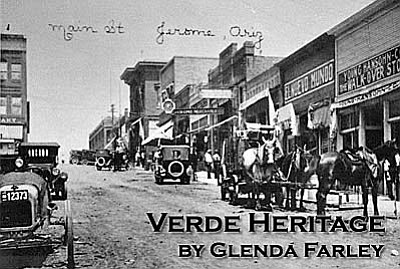 "Sewer and pavement for Jerome! Several long steps toward providing Jerome with these highly desirable improvements --- improvements that will lift the camp out of the frontier settlement class and make it a modern city --- were taken at the regular monthly meeting of the council, held last Tuesday night."

"The installation of a sewer system is dependent chiefly upon the city's success in securing from the United Verde Copper Company the right to use the water that now runs to waste down Bitter Creek. It is not expected that there will be any difficulty in carrying a bond issue."

"Before pavement can be laid official grades must be established. It is planned to pave Main Street from end to end under the improvement act and not issue bonds for that purpose."

"Naturally, sewers must come first. The council has no intention of having pavement laid and then tearing them up to install a sewer system."

"The crowd at the Tuesday night meeting of the council was the largest that has attended a session of the municipal fathers in months. It had been noised around that something was to be done in the sewer and pavement matters. Business men had been talking over those questions among themselves and were present in large numbers to lay their views before the councilmen."

"At the previous meeting the sewer question had been tentatively discussed and the street committee was charged with the duty of finding out whether the United Verde intended to use the sewer franchise granted to it several months ago. At Tuesday night's meeting Ray Lane was quoted as saying that the copper company had no immediate intention of taking advantage of the privilege accorded it. The franchise is not exclusive and according to City Attorney H. M. Gibbes, contains no clause which would prevent the city from installing a system of its own."

"The first requisite for the proposed sewer system, of course, is water. Councilman H. E. Dicus, who is a member of the street committee, volunteered to see Ray Lane, of the Utilities company, and find out whether the United Verde will grant the city the use of water that flows into Bitter Creek below the old smelter. It is believed that the water will be ample."

"PAVING MATTER: Next the council took up the paving question. Dan Shea, John Sullivan, C. R. Ewing, Phil Pecharich and several other citizens took a lively part in the discussion. There appeared to be a general belief that no bond issue for the purpose of laying pavement could be carried, and that any paving done must be under the improvement act. Attorney Gibbes explained that the act is a very complicated statute. When an improvement, such as pavement, is contemplated, a district must be created. The signatures of 51% of the property owners in the district must be secured on petitions asking the council to order the installation of the improvement. Then the other property owners must be given a certain time in which to protest. These are only a few of the formalities."

"It was suggested that not only Main Street but several side streets be paved. Dan Shea urged that no attempt be made to cover too much territory at first and predicted that a movement to pave more than Main Street would fail at this time, owing to the number of vacant lots owned by people who have not been able to build. This view was generally accepted though, of course, no final action was taken."

"OFFICIAL GRADES LACKING: The fact that there are no official grades in the town of Jerome was brought up. Some of the old timers thought that there was an official grade at one time but City Clerk Fred Whitaker said that it must have been lost in the shuffle somewhere. The necessity for establishing a grade before deciding on pavement was explained. Some of the owners may not agree to the pavement if the grade adopted places them above or below the street level."

"It was left with the street committee to take steps toward employing an engineer to establish grades."

"NEW HOGBACK ROAD: There was much discussion regarding the proposed new road along the south side of the hogback, east of the Mountain View house, to eliminate the road along the ridge of the hogback. The crying need for such a road was generally conceded. The street committee was asked to find out whether it will be necessary to buy any land in order to construct the new highway."