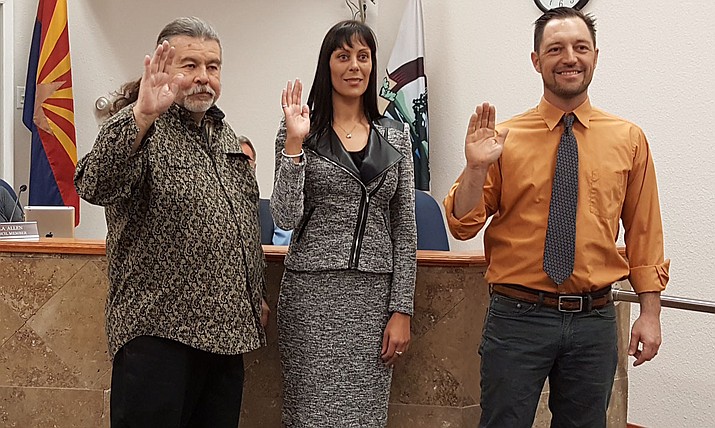 Mayor Elinski said in a press release that he is excited to welcome the new councilmembers, as well as to have another four years to serve with returning incumbent Ruben Jauregui.

“I was elected to serve as mayor for a four-year term, and I am proud to have the opportunity to continue my service to Cottonwood and the Verde Valley community,” said Mayor Elinski.

December’s agenda will kick off with a discussion of the Council’s strategic planning retreat and a proposed modified start time of the regular council meetings Dec. 6.

The Council will also make appointments to the Youth Advisory Commission as well as the Airport Commission, according to the news release.

Dec. 13, Council will hold a work session discussion of the city commissions and ways to increase public involvement. Dec. 20, Council will make the vice-mayor appointment, discuss council representatives to various boards and committees, as well as hear a follow up presentation on the Cottonwood Historic Home and Building Tour, the release stated.

All meetings start at 6 p.m. the first, second, and third Tuesdays of the month, and are held at the council chambers in Old Town, located at 826 N. Main St.

All agenda items can be found at the City of Cottonwood’s website at http://cottonwoodaz.gov/bcpz.php.

Mayor Elinski will interview former mayor Diane Joens on “Inside Cottonwood” Dec. 7 for a filmed half-hour segment. The two will talk about her near-decade long position as mayor for Cottonwood, said Mayor Elinski. The interview can be watched by visiting Verde Valley TV or on Suddenlink Channel 2. The mayor said he will be hosting one show a month

Mayor Elinski will keep regular office hours at City Hall 827 N. Main St. Every first, second, and third Tuesday of the month, he will be available from 4:30 p.m. until the scheduled council meeting. To schedule an appointment, or speak to Mayor Elinski, please call 928-340-2727.