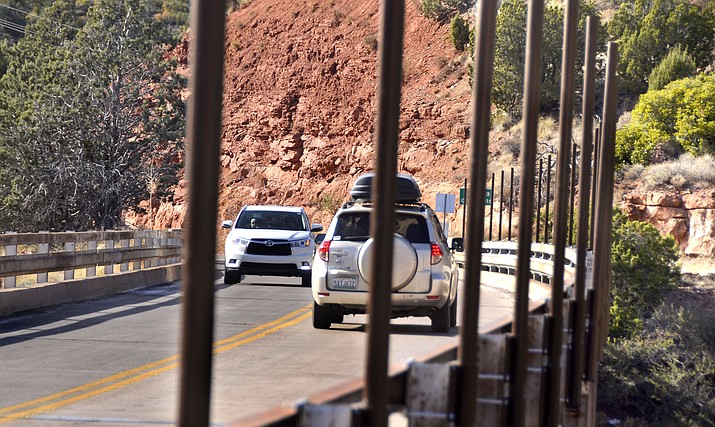 The City of Sedona sought ADOT’s help after four people committed suicide from the bridge in 2015, said an ADOT press release.

The construction of the protective fencing on Midgley Bridge in Sedona’s Oak Creek Canyon has begun with poles lining the west side of the bridge on Tuesday. The 10-foot-tall fencing, which will be chain-link style and attached to the bridge’s railings, is designed to be difficult to climb, according to ADOT. The City of Sedona sought ADOT’s help after four people committed suicide from the bridge in 2015, said an ADOT press release. Work to install fencing will involve overnight lane closures and alternating traffic over the bridge, located at milepost 376, said ADOT. The restriction will be in place from 8 p.m. to 6 a.m. Sundays through Fridays beginning Monday, Dec. 5, and ending Friday, Dec. 23. If necessary, work will resume on Monday, Dec. 26, and continue until complete, the release said. The City of Sedona, the U.S. Forest Service and Coconino County and the Arizona Department of Transportation is adding protective fencing in a partnership, the release said. VVN/Vyto Starinskas