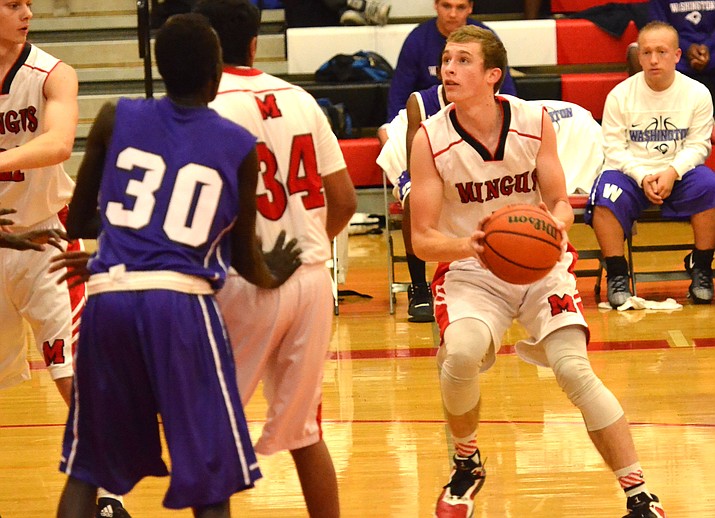 Senior Chase Paquin added 17 points along with a trio of steals on the defensive end of the floor in the Marauders’ 81-73 win over Washington Tuesday.

COTTONWOOD -- There is a definite offensive mindset to the Mingus Union boys basketball team as of late. Friday, the Marauders blitzed visiting Prescott 74-51 and Tuesday Mingus won its second in a row with a solid 81-73 victory over Washington.

Still, Mingus boss David Beery believes the best is yet to come for his Marauder squad.

“My nature is that can we get better and we can be a lot better than we are right now,” Beery said. “But I feel good about it. Our focus and effort is a lot better.”

Tuesday, the focus and effort was especially evident in the second half against Washington. After being down by as much as 15 points in the first half, the Marauders clawed their way back into the game and used a 21-10 third-quarter blitz to push their season record to 4-7.

Especially impressive to Beery was the way senior Miles Tapia and sophomore Chaz Taylor (7 points, 7 rebounds) maintained their cool and played smart basketball late in the game with four fouls each.

Tuesday, Tapia continued his torrid scoring streak with a 23-point effort and 10 rebounds. Senior Victor Anaya also had a hot hand contributing 18 points and four assists. Another senior, Chase Paquin, added 17 points along with a trio of steals on the defensive end of the floor.

Friday, the Marauders are on the road with a league game against Bradshaw Mountain.

“It’s an important game for both of us,” said Beery. “We’re somewhat familiar with them and we know they’re good; they beat us by 20 up there last year.”