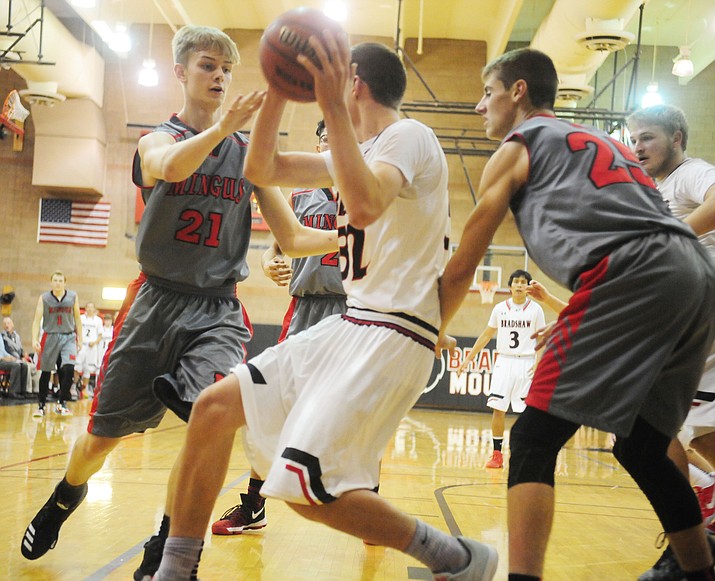 But the Bears, despite forcing overtime against Mingus Union, lost 62-61 to remain winless in power-point games at 0-8. They also dipped to 0-4 in the Class 4A Grand Canyon Region.

“It’s extremely frustrating,” Bears guard Blake Huntley said. “We hate losing just as much as the next team. But we’re turning the corner. We’re knockin’ on the door. I’m confident.”

Meanwhile, Mingus, which has won three in a row, improved to 2-1 in region and 3-3 in power-point contests (5-7 overall).

“I just tried to play my game, and my boys – they really believe in me and they trust me,” Anaya said. “So, I try to make the most of the opportunities they give me, and I’m just really proud of my boys the way they played.”

“He’s kind of been the heart and soul of our team this season so far,” Beery said. “He’s not a point guard. He’s been playing point for us all year. It’s a new position for him. He’s really stepped up to the challenge.”

“Both groups played really well,” Bears coach Matt Simpson said. “We adjusted well. We got more possessions. We got 10 steals, took a bunch of charges, fouled out two of their kids. But hats off to them [Marauders] for battling.”

In the fourth quarter, the Bears trailed Mingus 56-53 with 45 seconds left after a 3-pointer from Taylor. Bradshaw called a timeout with 16.4 seconds to go.

Following the timeout, Elliott Paulino drilled a game-tying 3-pointer from the left corner with 1.4 seconds left. Mingus tried to get a shot off at the buzzer to no avail.

In OT, Mingus claimed a 60-56 lead with 2:59 remaining before Vidovic drained a three-pointer to pull the hosts within one. Later, at 61-59 Mingus inside of two minutes left, a Huntley steal and layin tied it.

Mingus’ Paquin was subsequently whistled for a charge. Following a timeout with 1:33 to go, Bradshaw held the ball until 20 seconds remained.

That’s when Anaya made the play of the game, stealing a pass in the backcourt.

Fouled with 13 seconds left, Anaya converted the front-end of a two-shot foul for a 62-61 Mingus lead.

Bradshaw’s Young got the rebound, but Huntley missed a shot with 2 seconds to go as time expired.

“They were pressuring us and we threw it to Travis [Lamb]; it was just a bad pass,” Huntley said of Anaya’s steal. “It’s the game of basketball. We can’t dwell on it.”

“All week, our message to these guys is, ‘They’ve played a really tough schedule, they kicked our butt in the summer [league], they’re more physical than we are,’ ” he added. “ ‘And you guys can’t look at their scores and look at their record and stroll in here and get a win.’ ”

For the Bears, the loss was another tiny dagger in a frustrating start to the 2016-17 season. Bradshaw’s last two region losses have been by one point. In fact, the Bears have lost four games by a single point at the buzzer already this season.

“I feel a lot of heartache and pain for the boys because they’re playing so great, and they’re doing everything we ask,” Simpson said. “We’re just having a hard time turning the corner.”