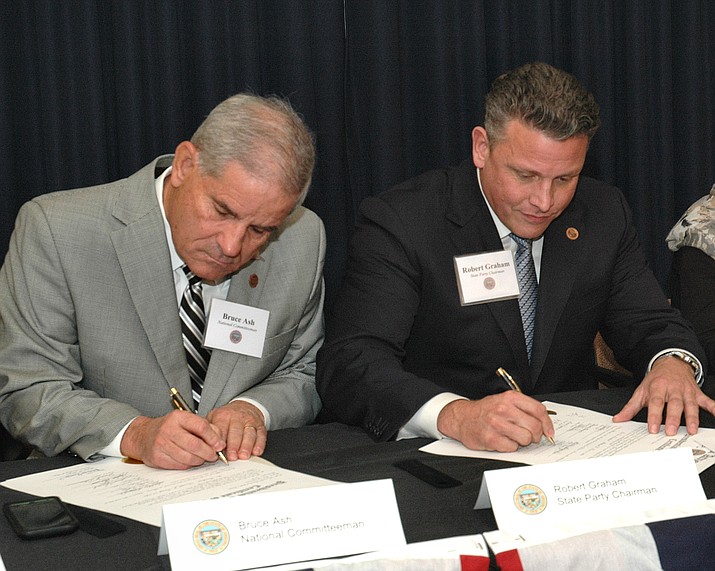 Republican electors Bruce Ash and Robert Graham sign their electoral ballots Monday for Donald Trump and Mike Pence. Graham said he believes that electors have an ethical obligation to support who won the popular vote in Arizona regardless of any external factors. (Capitol Media Services photo by Howard Fischer)

PHOENIX -- Ignoring hundreds of protesters outside and reports of Russian hacking, the state's 11 Republican electors cast their votes as expected Monday for Donald Trump.

State Party Chairman Robert Graham, one of those electors, said those hand-picked by the GOP had an obligation to support Trump who won the most votes in Arizona on Nov. 8.

"When someone runs for the Electoral College they understand that they're actually running to support the popular vote for our state,'' he told Capitol Media Services. Still, he conceded, they were under no actual legal obligation to vote that way.

"There's nothing binding them outside their conscience,'' Graham said.

And Graham said he was not bothered by the reports by both the FBI and CIA which concluded that Russia hacked into various emails, including of the Democratic National Committee, in a bid to sway the outcome of the election.

"The irony behind this is that good old Hillary Clinton has all these email discrepancies with Benghazi, her work with the Clinton Foundation,'' he said. "And now they're making a point of finding some kind of moral or ethics around this?''

Anyway, Graham said, what Russia did is irrelevant.

"If they're bad actors, they are what they are,'' he said.

"And it's just a bunch of accusations,'' Graham continued. "And the DoJ is politicizing it a very pathetic way,'' leaking information to the media rather than taking what they know to Congress.

"DoJ is using this as another opportunity, a last-ditch opportunity, to make hay out of what they suppose, the media suppose, as a black eye for Donald Trump,'' he said. "They keep trying to blemish a great victory, which was a movement of the people in this country.''

That comes as Arizona Sen. John McCain is siding with Democrats -- and against his own party leadership -- in seeking a special select committee to look into the role that Russia played in the election. Majority Leader Sam McConnell of Kentucky prefers it be handled by the existing Intelligence Committee.

Graham declined to weigh in on the issue.

"It's not my job to weigh in on their perspectives and their opinions,'' he said.

The Electoral College vote comes as a new statewide poll shows Arizonans nearly equally divided on the question of whether the president should be elected strictly by popular vote.

That system gives each state a set number of electoral votes based on the number of people in Congress. So Arizona, with nine representatives and two senators, gets 11.

But there was a decided, if not surprising, partisan split: Three-fourths of Democrats like the poplar vote, versus 44 percent of independents and 21 percent of Republicans.

This year, Clinton gained about 2.8 million more popular votes than Trump. And there was a similar situation in 2000 when Democrat Al Gore outpolled Republican George W. Bush but lost the electoral vote.

Secretary of State Michele Reagan, who presided over Monday's event, said there's a reason the Electoral College was created.

"Our Founding Fathers feared a candidate could unjustly manipulate public opinion and people wouldn't be able to make an informed choice,'' she said during the ceremonies.

"The thought was that by voting for a qualified group of individuals, it would be more difficult to manipulate voters,'' she explained. saying Alexander Hamilton believed the Electoral College would "protect'' voters.

Reagan also noted that giving each state votes based on representation in Congress gives smaller states a bigger say, proportionally, as no state has fewer than three electors no matter how few people live there.

The same survey that asked respondents about the Electoral College found that approximately one out of five people questioned believe there was widespread voter fraud in the last election.

But there was no partisan divide in that question, with an identical percentage of Republicans and Democrats reaching the same conclusion.

The margin of error in the survey is 3.7 percent.