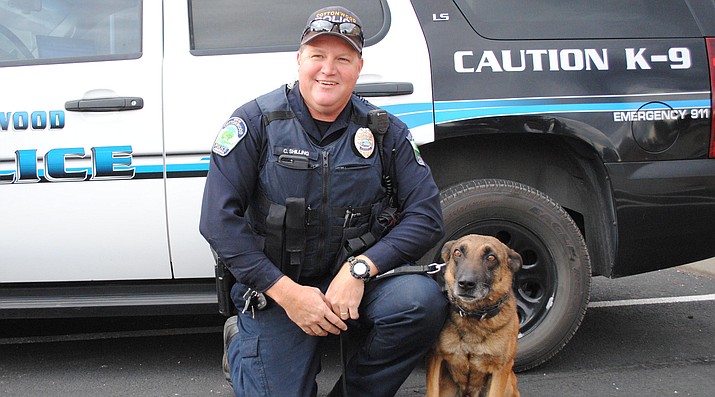 K-9 Jax and Officer Cory Shilling of Cottonwood Police Department pose for a picture outside of their building. Jax will be retiring in January. (VVN/Jennifer Kucich)

COTTONWOOD – Come January, a four-legged public servant will be enjoying his days filled with treats and belly rubs.

After 7 years of service and dedication, Jax – the Cottonwood Police Department’s K-9 - is preparing to retire after the first of the New Year.

The 8-year-old Belgian Malinois was born in the Czech Republic where he received some basic bite training as a young pup.

He then traveled to Waddel Kennels in Phoenix where more training - such as suspect apprehension - was introduced. More complex training occurs once the K-9 is introduced to his handler.

Officer Cory Shilling has been Jax’s handler for about 5 years.

“He’s very kind at heart. He really is,” said Officer Shilling of Jax.

“He loves the public to come up and pet him. He could do that all day long.”

Jax lives with Officer Shilling. But the K-9 must live outside in a kennel because he is a working dog.

“You can’t put the two together,” said Officer Shilling, defining the difference between a police dog and a pet.

“You can’t bring them into the house. If they’re too stimulated, then they will not want to work,” he explained.

But soon, Jax will be able to come into Officer Shilling’s house and be the pet.

“He’ll get to do all the stuff a normal dog gets to do,” said Officer Shilling.

Officer Shilling reflected back to some of the proud moments he had with Jax.

The K-9 shined during bite demonstrations at Tim’s Toyota Center at the Arizona Sundogs games. He also performed well at National Night out events.

Together, Jax and Officer Shilling have served and protected the community.

Jax has been utilized in multiple narcotics free air sniffs, and has been part of several SWAT operations. He has never bit anyone.

Having police dogs is important not only from the standpoint of keeping our city safe, but it also helps connect the police department to the community, said Gesell.

Officer Shilling said the K-9 has really helped him grow as a handler.

“Jax is very intelligent,” he said.

Officer Shilling now teaches at other agencies, and is a Certifying Official with the National Police Canine Association.

As of now, there is no replacement for Jax, and the police department needs financial assistance to purchase a new K-9.

The police department is accepting donations and will be setting up benefits.

They are also working with Salute to Heroes. Olsen’s Grains, who have fed Jax throughout his entire career, are working to help with the donation efforts as well. The Law Enforcement Heroes’ organization is actively raising funds for the new K-9.

For questions or more information about the K9 unit, Cottonwood Police Sergeant Kevin Murie may be reached at 928-340-2119.