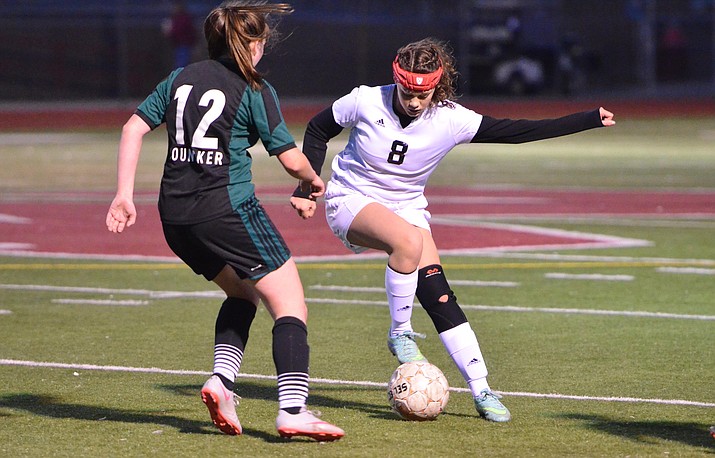 Mingus’ Jaiden Behlow (No. 8) was one of three Marauder freshmen to score goals in Mingus’ 3-2 win over Mohave Saturday (VVN/Vyto Starinskas)

BULLHEAD CITY -- The Mingus Union girls soccer team evened its season record at 4-4 with a 3-2 win on the road Saturday at Mohave.

Playing short-handed, Mingus Coach Andrea Strobel brought up some of her junior varsity players (who earlier defeated Mohave 2-1) to provide some bench support.

Freshmen Marli Uruta, Jaiden Behlow and Felecia Bueno all scored one goal each in the Mingus won.

Ureta tallied the first Mingus goal at the 9-minute mark on an assist from Madi Backus. Behlow scored at the 22-minute mark on a pass from Auli Hanks, and Hanks would later set up the winning goal by Bueno at the 34-minute mark.

“Mohave is a tough team,” said Coach Strobel, “and although they had possession more than we did, we had more shots on goal and more that went into the net. Auli had some nice shots on goal that just didn’t find the net.”

Strobel was also happy with the play of JV freshman Gabi San Felice who did a solid job in defense stopping Mohave’s relentless attack in the second half when Mingus was playing against strong winds.

“Hannah Arwine went up from defense to play midfield.  We played 4-1-4-1 1st half, which is a stronger attacking lineup for us,” said Strobel. “Second half against the wind and with a 3-1 lead, we went more defensive with a 4-2-3-1 formation. Defense has been working on keeping their shape and linking together more and it made a difference in this game.”

The Mingus girls will take a break until after the first of the year when the Marauders travel to Prescott Jan. 3.