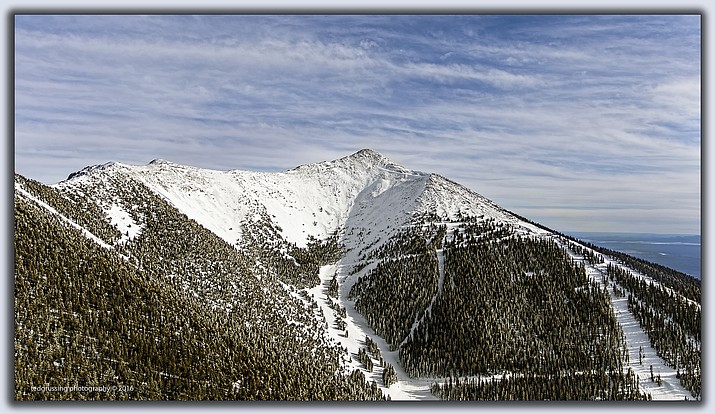 The mountain … it was fun to be back up at the peaks, winds were down to 20 kts at altitude and perpendicular to the west facing slopes, so I made a number of passes along the mountain starting at 12,500’ and swinging back at successively lower altitudes. This shot was taken at roughly at 11,670’ and catches the upper portion of Arizona Snow Bowl; the peak is of course Agassiz Peak which tops out at about 12,300’. There were hundreds of skiers and snow boarders on the slopes and it looked like a great day for skiing. I made a few more passes back and forth until I was down to 10,000’ and then headed around the north side of the peaks and spent some time shooting Sunset Crater, getting some close ups of the heart shaped crater and also patterns in the volcanic fields in the area before heading home.

Heading back up there in the morning as I want to get more shots of the patterns in the volcanic fields. Some of the shots I got today were of smaller cones where off road vehicles have been ripping them up going up and down the cinder cones, that kind of damage will likely not repair itself for decades if ever, but there are some beautiful patters they have carved into the cones … perhaps one of those tomorrow night.

Hope your day was terrific and the new day as good or better. Cheers, life is good!

Though changed as are my songs from youth,

A voice within my heart still sings,

Live thou in tenderness and truth,

And love mankind instead of things.