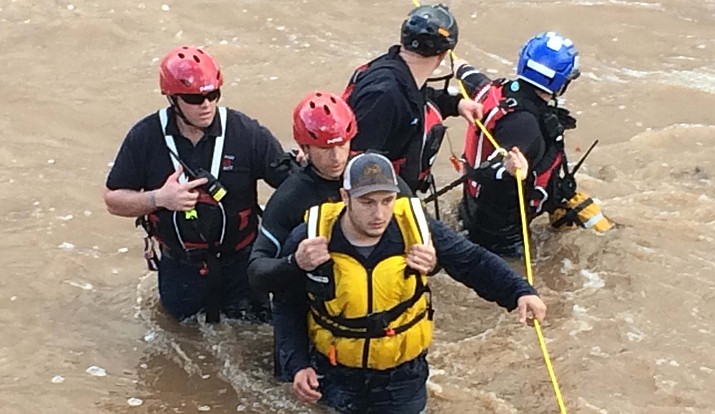 MCGUIREVILLE –A motorist was rescued Thursday afternoon after his truck ended up in Dry Beaver Creek at Kimberly’s Way in McGuireville due to significant runoff from recent rain.

Around 2:15 p.m., Copper Canyon Fire and Medical Authority was dispatched to a report of a pick-up truck that had been pushed down stream, according to a news release.

Crews made voice contact with the man in the truck about 100 yards downstream from the crossing, the release stated. The truck was lodged on some terrain adjacent to some small trees - firmly in the middle of the very swollen creek, continued the news release.

With limited technical rescue/swiftwater resources on scene, additional requests were made to Sedona Fire District to respond with technicians, as well as an ambulance from Verde Valley Fire District. CCFMA also recalled technicians from their roster to support the incident. Yavapai County Sherriff was also on scene and requested a response from their rescue team out of Prescott, according to the release. A request for a Department of Public Safety Helicopter was also made, as a back-up resource, but the aircraft were all grounded due to the weather, said CCFMA.

After setting up an upstream spotter to watch for floating hazards and monitoring the rising water level, resources were divided to both sides of the swollen creek, according to the release. CCFMA said crews then created several strategies to attempt to assist the uninjured man out of the truck to the shoreline.

An initial effort to float an inflatable raft with paddlers came close to succeeding, but unfortunately the current was too strong for the crew on the raft to “make the eddy” by pulling the raft into the current behind the truck, said CCFMA.

This crew was able to safely float downstream and after exiting the water safely, assisted with the next attempt. The second attempt proved to be successful when crews delivered a rope to the vehicle by using the stream’s current, stated the release, and the victim then tied this rope off to his truck bed.

CCFMA said this enabled a “swimmer” to use this angled line to safely approach the truck from upstream and deliver a life vest and helmet to the stranded motorist.

The victim was seen on top of his truck, carrying a box.

This same line was then relocated downstream on the shore, stated the release, and the victim and the rescuer took advantage of the current to “ferry” along the angled rope safely to the shore.

The victim was unable to save the box from the water. The box contained a brand new laptop.

CCFMA said they greatly appreciated the support of YCSO, DPS, VVFD, and SFD in helping to mitigate the incident safely. There were no reported injuries to any of the responders, the release stated, and the victim refused further treatment after medical evaluation from Verde Valley Fire ambulance personnel.

CCFMA wants to remind everyone that attempting to drive across flooding stream beds is simply not worth the risk. Floodwaters move and change the road surface, and it may no longer be where it typically is. While this incident fortunately did not result in injuries, it easily could have turned out much worse. At a minimum, the truck involved in this incident will need costly repairs, or to be replaced.